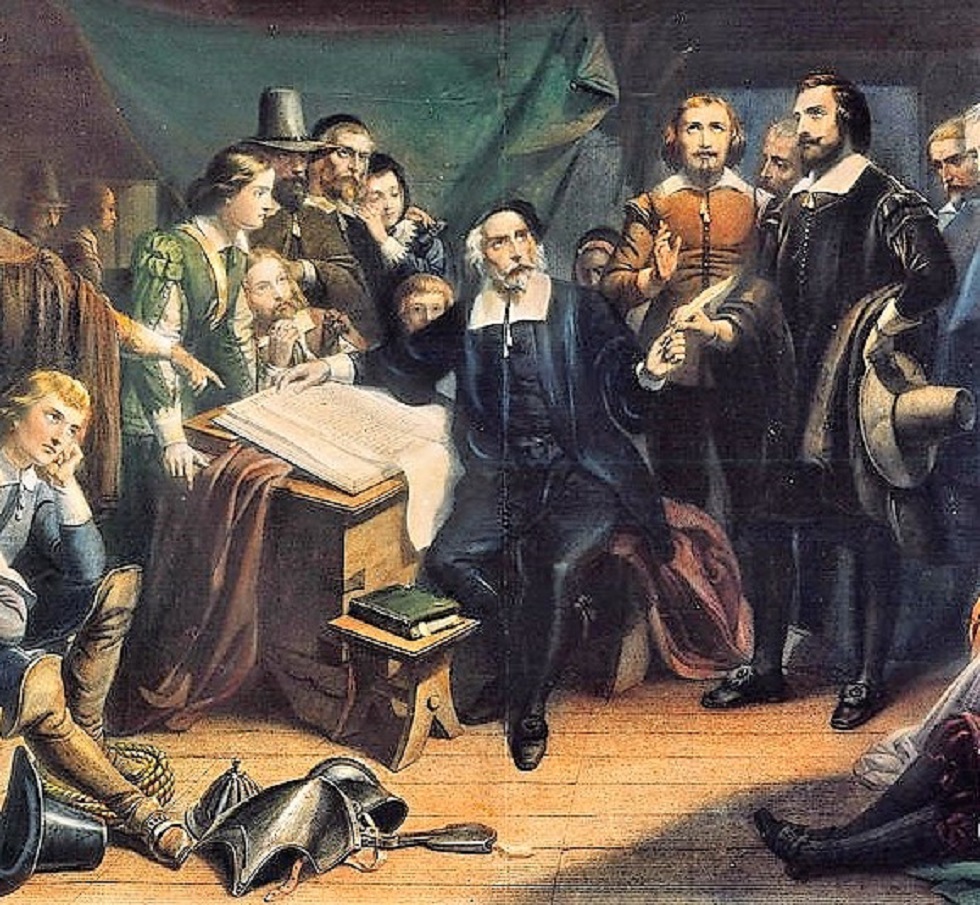 Each new agreement among the gentlemen of the new European colonies along the Atlantic coast inches the citizens in the North American colonies toward unification & toward a society "By the People," well, by the men at least.  The “Agreement between the Settlers at New Plymouth” (the Mayflower Compact), November 11, 1620, is the oldest political covenant in the New World. It is considered a covenant because it invokes God as witness to the agreement. The Salem Covenant (1629) and Enlarged Salem Covenant (1636) articulate beliefs that informed developing civil and church communities. The Dedham Covenant (1636) founded a town government. The Cambridge Platform (1648) established the congregational system of covenanted churches in New England, setting the pattern for later civil and church federations. The Declaration of Independence (1776) follows the covenant form and, when linked to the frame of government supplied by either the Articles of Confederation (1781) or the U.S. Constitution (1787), established a national covenant in the federal tradition.

Dedham, Massachusetts, began with the first settlers' arrival in 1635. The Puritans who built the village on what the Indians called Tiot incorporated the plantation in 1636. They devised a form of government in which almost every freeman (not women) could participate and eventually chose selectmen (not women) to run the affairs of the town. They then formed a church and nearly every family had at least one member.

One: We whose names are here unto subscribed do, in the fear and reverence of our Almighty God, mutually and severally promise amongst ourselves and each other to profess and practice one truth according to that most perfect rule, the foundation whereof is everlasting love.

Two: That we shall by all means labor to keep off from us all such as are contrary minded, and receive only such unto us as may be probably of one heart with us, [and such] as that we either know or may well and truly be informed to walk in a peaceable conversation with all meekness of spirit, [this] for the edification of each other in the knowledge and faith of the Lord Jesus, and the mutual encouragement unto all temporal comforts in all things, seeking the good of each other out of which may be derived true peace.

Three: That if at any time differences shall rise between parties of our said town, that then such party or parties shall presently refer all such differences unto some one, two or three others of our said society to be fully accorded and determined without any further delay, if it possibly may be.

Four: That every man that … shall have lots [and] in our said town shall pay his share in all such…charges as shall be imposed on him…, as also become freely subject unto all such orders and constitutions as shall be…made now or at any time hereafter from this day forward, as well for loving and comfortable society in our said town as also for the prosperous and thriving condition of our said fellowship, especially respecting the fear of God, in which we desire to begin and continue whatsoever we shall by loving favor take into hand.

Five: And for the better manifestation of our true resolution herein, every man so received into the town is to subscribe hereunto his name, thereby obliging both himself and his successors after him forever, as we have done.
Posted by Barbara Wells Sarudy at 4:00 AM