Almost from the start, investors in the Virginia Company in England were unhappy with the accomplishments of their Jamestown colonists. They therefore sought a new charter, which the king granted in May 1609. They took immediate steps to put the company on a sounder financial footing by selling shares valued at 12 1/2, 25, and 50 pounds (English monetary unit, originally equivalent to one pound of silver). Investors were promised a dividend from whatever gold, land, or other valuable commodities the Company amassed after seven years. 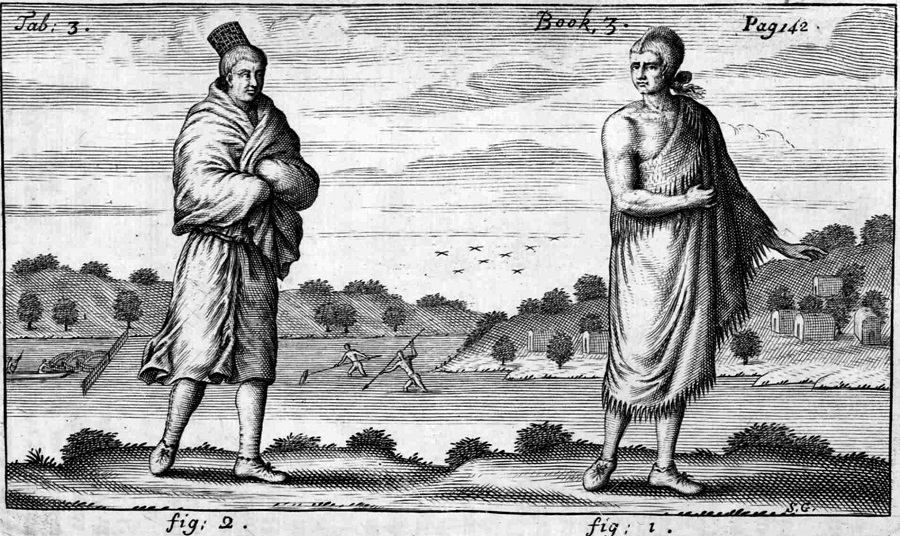 From The History and the Present State of Virginia, Book III, Of the Indians, their Religion, Laws, and Customs, in War and Peace.  Beverley, Robert, ca. 1673-1722.
Meanwhile, the charter allowed the Company to make its own laws and regulations, subject only to their compatibility with English law. To avoid the disputes that had characterized Virginia in its first years, the Company gave full authority and nearly dictatorial powers to the colony's governor. These changes were nearly too little and too late, for Jamestown was just then experiencing its "starving time." The Company, however, was bent on persevering and sent a new batch of ships and colonists in 1611. Over the next five years, Sir Thomas Gates and then Sir Thomas Dale governed the colony with iron fists via the "Lawes Devine, Morall, and Martiall."

The harsh regimes of the Virginia governors were not especially attractive to potential colonists. What was more, the colonists who did go to Virginia often did not have the skills and knowledge to help the colony prosper. The colonists not only found little of value, they were remarkably unable even to feed themselves. As a result, huge numbers of colonists perished from disease (many of which they brought with them), unsanitary conditions, and malnutrition. Between 1614 and 1618 or so, potential colonists were much more attracted to the West Indies and Bermuda than they were Virginia.

By 1618, the Virginia Company was forced to change course again. The Company had not solved the problem of profitability, nor that of settlers' morale. Sir Edwin Sandys became Company Treasurer and embarked on a series of reforms. He believed that the manufacturing enterprises the Company had begun were failing due to want of manpower. He embarked on a policy of granting sub-patents to land, which encouraged groups and wealthier individuals to go to Virginia. He sought to reward investors and so distributed 100 acres of land to each adventurer. He also distributed 50 acres to each person who paid his or her own way and 50 acres more for each additional person they brought along. This was known as the Virginia headright system.

Finally, Sandys thought it essential to reform the colony's governing structure. He hit upon the idea of convening an assembly in the colony, whose representatives would be elected by inhabitants. The assembly would have full power to enact laws on all matters relating to the colony. Of course, these laws could be vetoed by either the governor or the Company in London.

It may be said that some things improved, while others did not. With the experiments of John Rolfe, the colony finally discovered a staple product--tobacco. The colonists wanted to plant tobacco because it was a cash crop, even though the King opposed the use of the weed. But the Company constantly discouraged the cultivation of tobacco because its production seduced the colonists away from planting corn. The colony also continued to face the problem of lack of laborers and inability to feed itself. The ultimate answer to the labor problem was ominously foreshadowed in a little-noticed event that Rolfe described to Sandys in 1619: the arrival of a Dutch man-of-war carrying a group of captive Africans, for by the end of the century, African slave labor would become the colony's economic and social foundation. Indian relations, which seemed quiet for a time, finally spelled the end to the Virginia Company. In 1622, Indians rose up and massacred a large number of Virginia colonists. This led to an inquiry into Company affairs and finally the revocation of its charter.
Posted by Barbara Wells Sarudy at 4:00 AM