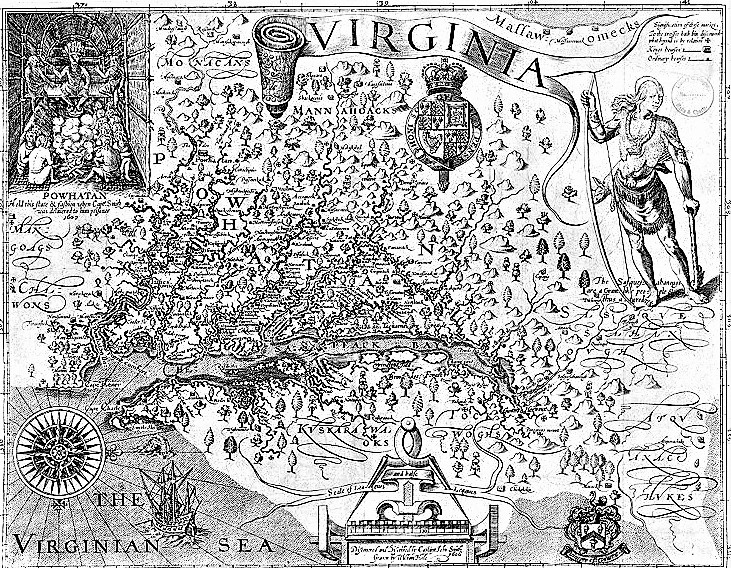 All of these early colonial agreements were decided by men, as women in the British American colonies, which became the United States of America, did not get the right to vote until 1920.

Constitution for the Council & Assembly in Virginia July 24, 1621

To all people to whom these presents shall come, be seen, or heard, the Treasurer, Council & Company of Adventurers & Planters of the City of London for the first colony in Virginia send greeting.

Know that we, the said Treasurer, Council & Company, taking into our careful consideration the present state of the said colony in Virginia & intending, by the divine assistance, to settle such a form of government there as may be to the greatest benefit & comfort of the people & whereby all injustice, grievance, & oppression may be prevented & kept off as much as possible from the said colony, have thought fit to make our entrance by ordaining & establishing such supreme counsels as may not only be assisting to the Governor for the time being in administration of justice & the executing of other duties to his office belonging, but also by their vigilant care & prudence may provide as well for remedy of all inconveniences growing from time to time, as also for the advancing of increase, strength, stability, & prosperity of the said colony,

We, therefore, the said Treasurer, Council & Company, by authority directed to us from his Majesty under his great seal, upon mature deliberation do hereby order & declare that from hence forward there be two supreme councils in Virginia for the better government of the said colony as aforesaid. The one of which councils to be called the Council of State & whose office shall be chiefly assisting, with their care, advise, & circumspection, to the said Governor shall be chosen, nominated, placed, & displaced from time to time by us, the said Treasurer, Council & Company & our successors; which Council of State shall consist for the present only of those persons are here inserted, viz. Sir Francis Wyatt, Governor of Virginia; Captain Francis West; Sir George Yeardley, Knight; Sir William Newce, Knight, Marshal of Virginia; Mr. George Sandys, Treasurer; Mr. George Thorpe, Deputy of the College; Captain Thomas Newce, Deputy for the Company; Mr Christopher Davison, Secretary; Doctor Potts, physician to the company; Mr. Paulet; Mr. Leech; Captain Nathaniel Powell; Mr. Roger Smith; Mr. John Berkley; Mr. John Rolf; Mr. Ralph Hamer; Mr. John Pountus; Mr. Michael Lapworth; Mr. Harwood; Mr. Samuel Macocke. Which said councillors & council we earnestly pray & desire, & in his Majesty’s name strictly charge & command, that all factious partialities & sinister respects laid aside, they bend their care & endeavors to assist the said Governor first & principally in advancement & of the honor & service of Almighty God & the enlargement of His kingdom amongst those heathen people, & in erecting of the said colony in one obedience to his Majesty & all lawful authority from his Majesty’s derived, & lastly in maintaining the said people in justice & Christian conversation among themselves & in strength & hability to withstand their enemies. And this Council is to be always, or for the most part, residing about or near the said Governor, & yearly, of course, & no oftener but for very extraordinary & important occasions, shall consist for the present of the said Council of State & of two burgesses out of every town, hundred & other particular plantation to be respectfully chosen by the inhabitants. Which Council shall be called the General Assembly, wherein, as also in the said Council of State, all matters shall be decided, determined, & ordered by the greater part of the voices then present, reserving always to the Governor a negative voice. And this General Assembly shall have free power to treat, consult, & conclude as well of all emergent occasions concerning public weal of the said colony & every part thereof as shall from time to time appear necessary or requisite. Wherein, as in all other things, we require the said General Assembly, as also the said Council of State, to imitate & follow the policy of the form of government, laws, customs, manners of loyal & other administration of justice used in the realm of England, as near as may be even as ourselves by his Majesty’s letters patents are required; provided that no laws or ordinances made in the said General Assembly shall be & continue in force & validity unless the same shall be solemnly ratified & confirmed in a general greater court of the said court here in England & so ratified & returned to them under our seal. It being our intent to afford the like measure also unto the said colony that after the government of the said colony shall once have been well framed & settled accordingly, which is to be done by us as by authority derived from his Majesty & the same shall have been so by us declared, no orders of our court afterward shall bind the said colony unless they be ratified in like manner in their General Assembly.

In witness whereof, we have hereunto set our common seal the 24th day of (July) 1621, & in the year of the reign of our governor, Lord James by the […] of God of England, Scotland, France, & Ireland, King, Defender of the […], viz, of England, France, & Scotland the nineteenth & of Scotland the four & fiftieth.
Posted by Barbara Wells Sarudy at 4:00 AM