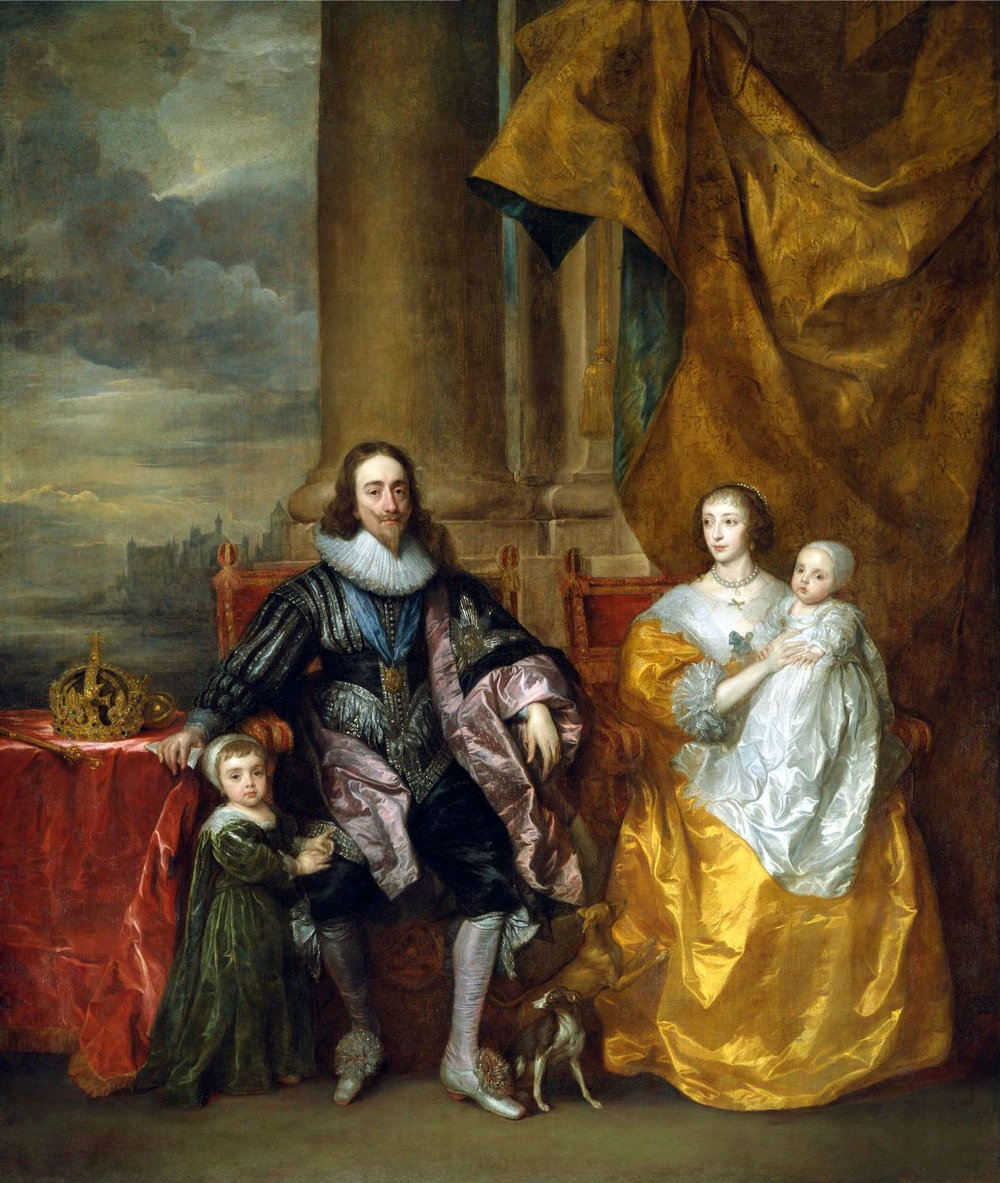 King Charles I came to the throne in 1625, just as the colonies in North America were emerging,   utterly convinced that he had been put there by God and that his governance must, therefore, be beyond question. As Charles saw things, the Parliament that sat at Westminster had only one function, namely to enact his policies and raise the necessary funds for any wars or other forays that incurred an expense.  Parliament had different ideas.

Petition of Right, (1628) petition sent by the English Parliament to King Charles I complaining of a series of breaches of law. The petition sought recognition of 4 principles: no taxation without the consent of Parliament, no imprisonment without cause, no quartering of soldiers on subjects, & no martial law in peacetime. To continue receiving subsidies for his policies, Charles was compelled to accept the petition, but he later ignored its principles.

The King’s Most Excellent Majesty.
Humbly shew unto our Sovereign Lord the King, the Lords Spiritual & Temporal, & Commons, in Parliament assembled, that whereas it is declared & enacted by a statute made in the time of the Reign of King Edward I., commonly called Statutum de Tallagio non concedendo, that no tallage or aid shall be laid or levied by the king or his heirs in this realm, without the good will & assent of the archbishops, bishops, earls, barons, knights, burgesses & other the freemen of the commonalty of this realm; & by the authority of Parliament holden in the five-and-twentieth year of the reign of King Edward III., it is declared & enacted, that from thenceforth no person should be compelled to make any loans to the king against his will, because such loans were against reason & the franchise of the land; & by other laws of this realm it is provided, that none should be charged by any charge or imposition, called a benevolence, nor by such like charge; by which the statutes before mentioned, & other the good laws & statutes of this realm, your subjects have inherited this freedom, that they should not be compelled to contribute to any tax, tallage, aid, or other like charge not set by common consent in Parliament.

II. Yet nevertheless, of late divers commissions directed to sundry commissioners in several counties, with instructions, have issued; by means wherof your people have been in divers places assembled, & required to lend certain sums of money unto your Majesty, & many of them, upon their refusal so to do, have had an oath administered unto them not warrantable by the laws or statutes of this realm; & have been constrained to become bound to make appearance & give attendance before your privy council, & in other places, & others of them have been therefore imprisoned, confined, & sundry other ways molested & disquieted; & divers other charges have been laid & levied upon your people in several counties by lord lieutenants, deputy lieutenants, commissioners for musters, justices of peace & others, by command or direction from your Majesty, or your Privy Council, against the laws & free customs of this realm.

III. And where also by the statute called “The Great Charter of the Liberties of England,” it is declared & enacted that no freeman may be taken or imprisoned, or be disseised of his freehold or liberties, or his free customs, or be outlawed or exiled, or in any manner destroyed, but by the lawful judgment of his peers, or by the law of the land.

IV. And in the eight-and-twentieth year of the reign of King Edward III., it was declared & enacted by authority of Parliament, that no man of what estate or condition that he be, should be put out of his land or tenements, nor taken, nor imprisoned, nor disherited, nor put to death, without being brought to answer by due process of law.

V. Nevertheless, against the tenor of the said statutes, & other the good laws & statutes of your realm to that end provided, divers of your subjects have of late been imprisoned without any cause shewed; & when for their deliverance they were brought before your justices by your Majesty’s writs of Habeas Corpus, there to undergo & receive as the court should order, & the keepers commanded to certify the causes of their detainer, no cause was certified, but that they were detained by your Majesty’s special command, signified by the lords of your Privy Council, & yet were returned back to several prisons, without being charged with anything to which they might make answer according to the law.

VI. And wheras of late great companies of soldiers & mariners & been dispersed into divers counties of the realm, & the inhabitants against their wills have been compelled to receive them into their houses, & there to suffer them to sojourn, against the laws & customs of this realm, & to the great grievance & vexation of the people:

VII. And wheras also by authority of Parliament, in the five-and-twentieth year of the reign of King Edward III., it is declared & enacted, that no man shall be forejudged of life or limb against the form of the Great Charter & the law of the land; & by the said Great Charter & other the laws & statutes of this your realm, no man ought to be adjudged to death but by the laws established in this your realm, either by the customs of the same realm, or by acts of Parliament: And whereas no offender of what kind soever is exempted from the proceedings to be used, & punishments to be inflicted by the laws & statutes of this your realm: nevertheless of late times divers commissions under your Majesty’s great seal have issued forth, but which certain persons have been assigned & appointed commissioners, with powers & authority to proceed within the land, according to the justice of martial law, against such soldiers & mariners, or other dissolute persons joining with them, as should commit any murder, robbery, felony, mutiny, or other outrage or misdemeanour whatsoever, & by such summary course & order as is agreeable to martial law, & as is used in armies in time of war, to proceed to the trial & condemnation of such offenders, & them to cause to be executed & put to death according to the law martial:

VIII. By pretext whereof some of your Majesty’s subjects have been by some of the said commissioners put to death, when & where, if by the laws & statutes of the land they had deserved death, by the same laws & statutes also they might, & by no other ought to have been adjudged & executed.

IX. And also sundry grievous offenders, by colour thereof claiming an exemption, have escaped the punishments due to them by the laws & statutes of this your realm, by reason that divers of your officers & ministers of justice have unjustly refused or forborn to proceed against such offenders according to the same laws & statutes, upon pretence that the said offenders were punishable only by martial law, & by authority of such commissions as aforesaid: which commissions, & all other of like nature, are wholly & directly contrary to the said laws & statutes of this your realm.

X. They do therefore humbly pray your most excellent Majesty, that no man hereafter be compelled to make or yield any gift, loan, benevolence, tax or such charge, without common consent by act of Parliament; & that none be called to make, answer, or take such oath, or to give attendance, or be confined, or otherwise molested or disquieted concerning the same, or for refusal thereof; & that no freeman, in any such manner as is before mentioned, be imprisoned or detained; & that your Majesty would be pleased to remove the said soldiers & mariners; & that your people may not be so burthened in time to come; & that the aforesaid commissions for proceeding by martial law, may be revoked & annulled; & that hereafter no commissions of like nature may issue forth to any person or persons whatsoever to be executed as aforesaid, lest by colour of them any of your Majesty’s subjects be destroyed, or put to death contrary to the laws & franchise of the land.

XI. All which they most humbly pray of your most excellent majesty as their rights & liberties, according to the laws & statutes of this realm; & that your Majesty would also vouchsafe to declare, that the awards, doings & proceedings, to the prejudice of your people in any of the premises shall not be drawn hereafter into consequence or example; & that your Majesty would be also graciously pleased, for the further comfort & safety of your People, to declare your royal will & pleasure, that in the things aforesaid all your officers & ministers shall serve you according to the laws & statutes of this realm, as they tender the honour of your Majesty, & the prosperity of this kingdom.
Posted by Barbara Wells Sarudy at 4:00 AM