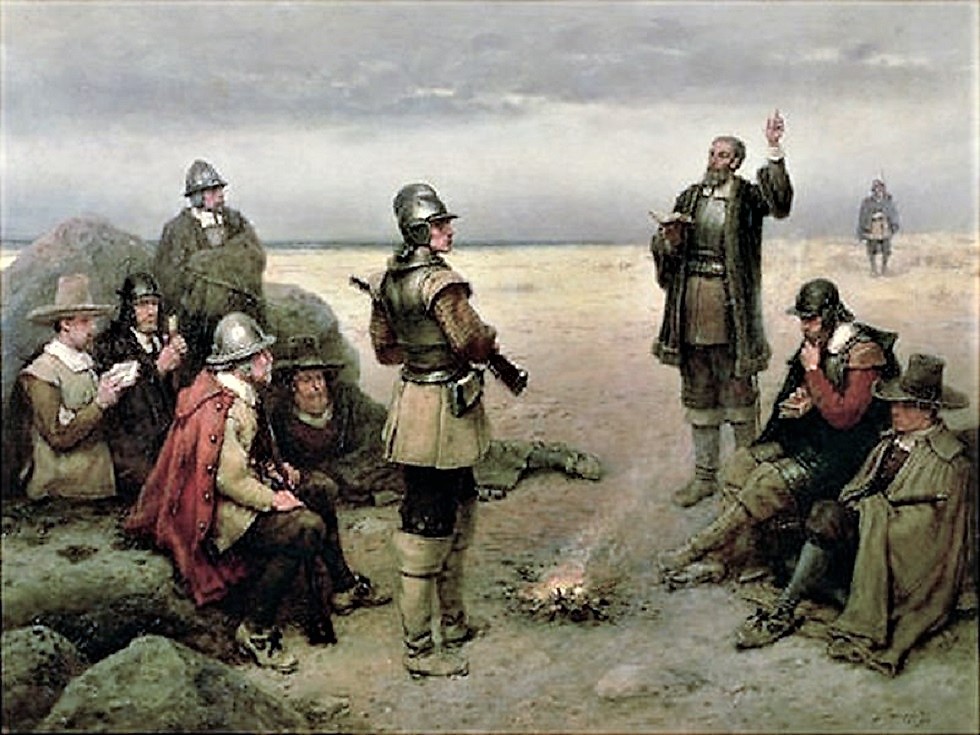 The “Oath of a Freeman” was a loyalty pledge required of all new members of the Massachusetts Bay Company in the 1630s. The “Oath” was a vow of obedience to the Company's government & a promise not to conspire against it. Previous examples of oaths in England pledged loyalty to the Crown. The absence of references to the King made the “Oath” a uniquely American document. The earliest known version of the “Oath” was handwritten by Massachusetts Bay Governor John Winthrop in 1631. Governor Winthrop stated in his diary that the “Oath” was the “first thing” printed by Stephen Daye in 1638 or 1639. Stephen Daye was an English locksmith who sailed to Boston in 1638 with a Puritan cleric who had smuggled a printing press on board the ship. After the cleric & his printer died at sea, Daye & his sons took possession of the press & set up Cambridge Press, the first printing company in America, in Boston.

I, A.B.&c. being, by the Almighties most wise disposicon, become a membr of this body, consisting of the Gounr, Assistants, & a comnlty of the Mattachusets in Newe England, doe, freely & sincerely acknowledge that I am iustly & lawfully subject to the goumt of the same, & doe accordingly submit my pson & estate to be ptected, ordered, & gouned by the laws & constitucons thereof, & doe faithfully pmise to be from time to time obedient & conformeable thervnto, & to the authie of the said Gounr & Assistnts & their successrs, & to all such lawes, orders, sentences, & decrees as shalbe lawfully made & published by them or their successrs; & I will alwaies indeavr (as in dutie I am bound) to advance the peace & wellfaire of this bodie or commonwealth to my vtmost skill & abilitie; & will, to my best power & meanes, seeke to devert & prevent whatsoeuer may tend to the ruyne or damage thereof, or of any the said Gounr, Deputy Gounr, or Assistants, or any of them, or their siccessrs, & will giue speedy notice to them, or some of them, of any sedicon, violence, treachery, or other hurt or ciuil which I shall knowe, heare, or vehemtly suspecte to be plotted or intended against the commonwealth, or the said goumt established; & I will not att any time suffer or giue consent to any counsell or attempt that shalbe offered giuen, or attempted for the impeachmt of the said goumt, or makeing any change or alteracon of the same, contrary to the lawes & ordinances thereof, but shall doe my vtmost endeavr to discover, oppose, & hinder, all & euy such counsel & attempts. Soe helpe me God.
Posted by Barbara Wells Sarudy at 4:00 AM