Over There - Puritans & The Divine Right of Kings

"A Trew Law of Free Monarchs"
James I Stuart
The "Divine Right of Kings." 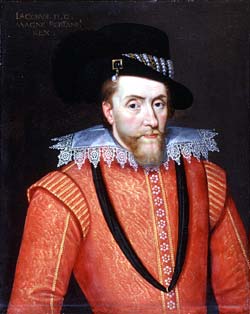 This political theory contributed to the exodus of the Puritans to America in 1630, & resistance to it was the ultimate goal of 3 revolutions: 1) the Puritan Revolution of the 1640s, 2) the Glorious Revolution, & 3) the American Revolution.

The state of monarchy is the supremest thing upon earth; for kings are not only God's lieutenants upon earth, and sit upon God's throne, but even by God himself are called gods. There be three principal similitudes that illustrate the state of monarchy: one taken out of the word of God; and the two other out of the grounds of policy and philosophy. In the Scriptures kings are called gods, and so their power after a certain relation compared to the divine power. Kings are also compared to fathers of families: for a king is truly Parens patriae, the politique father of his people. And lastly, kings are compared to the head of this microcosm of the body of man.

Kings are justly called gods, for that they exercise a manner or resemblance of divine power upon earth: for if you will consider the attributes to God, you shall see how they agree in the person of a king. God hath power to create or destrov make or unmake at his pleasure, to give life or send death, to judge all and to be judged nor accountable to none; to raise low things and to make high things low at his pleasure, and to God are both souls and body due. And the like power have kings: they make and unmake their subjects, thev have power of raising and casting down, of life and of death, judges over all their subjects and in all causes and yet accountable to none but God only. . . .

I conclude then this point touching the power of kings with this axiom of divinity, That as to dispute what God may do is blasphemy....so is it sedition in subjects to dispute what a king may do in the height of his power. But just kings will ever be willing to declare what they will do, if they will not incur the curse of God. I will not be content that my power be disputed upon; but I shall ever be willing to make the reason appear of all my doings, and rule my actions according to my laws. . . I would wish you to be careful to avoid three things in the matter of grievances:

First, that you do not meddle with the main points of government; that is my craft . . . to meddle with that were to lesson me . . . I must not be taught my office.

Secondly, I would not have you meddle with such ancient rights of mine as I have received from my predecessors . . . . All novelties are dangerous as well in a politic as in a natural body. and therefore I would be loath to be quarreled in my ancient rights and possessions, for that were to judge me unworthy of that which my predecessors had and left me.

And lastly, I pray you beware to exhibit for grievance anything that is established by a settled law, and whereunto . . . you know I will never give a plausible answer; for it is an undutiful part in subjects to press their king, wherein they know beforehand he will refuse them.