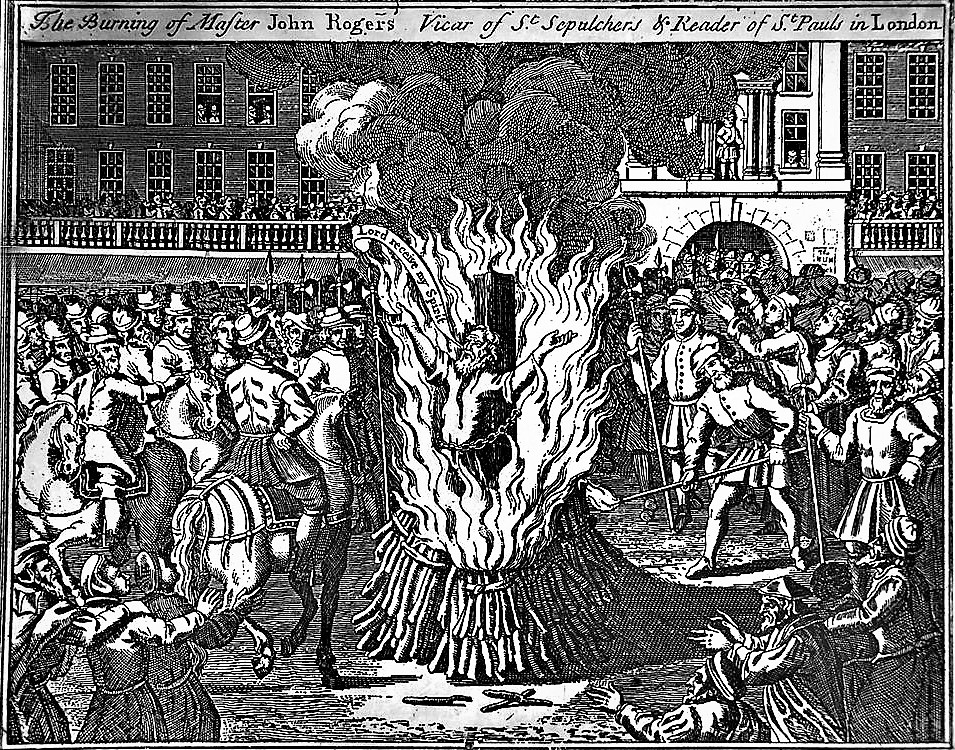 The 1555 Burning of Master John Rogers. Engraving from John Fox, The Third Volume of the Ecclesiastical History containing the Acts and Monuments of Martyrs.

John Rogers the Martyr was the first Protestant to be burned at the stake during the reign of "Bloody Queen Mary." because he believed the need to reform "THE CHURCH" (the Roman Catholic Church). This woodcut illustrates the burning of John Rogers which took place in Smithfield (Southeast corner on the grounds of the Tower of London.)

John Rogers (1500-1555) was a Catholic priest who converted to Protestantism in the 1530s under the influence of William Tyndale and assisted in the publication of Tyndale's English translations of the Bible. Burned alive at Smithfield on February 4, 1555, Rogers became the "first Protestant martyr" executed by England's Catholic Queen Mary. He was charged with heresy, including denial of the real presence of Christ in the sacrament of communion. 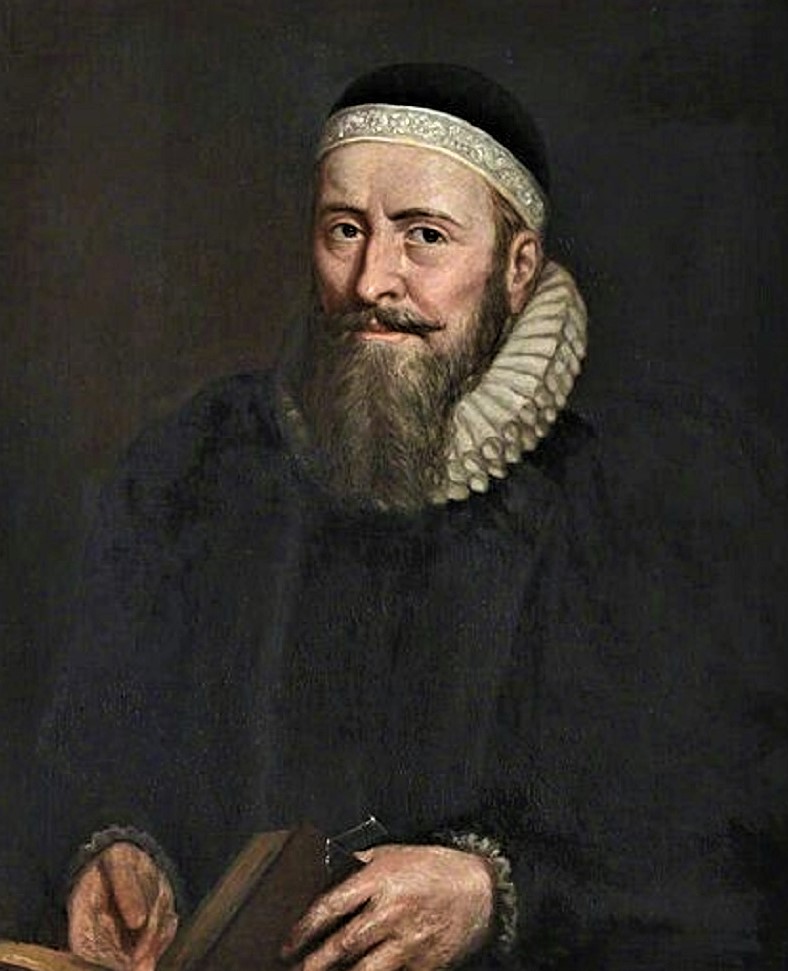 John Rogers burned to death at a stake at Smithfield, England on this Monday morning, February 4, 1555.  Born about 1500, Rogers was educated at Cambridge. He became a Catholic priest & accepted a position in the church at the time that the Protestant Reformation was in full swing. He moved to Antwerp, Holland, where he ministered to English merchants. 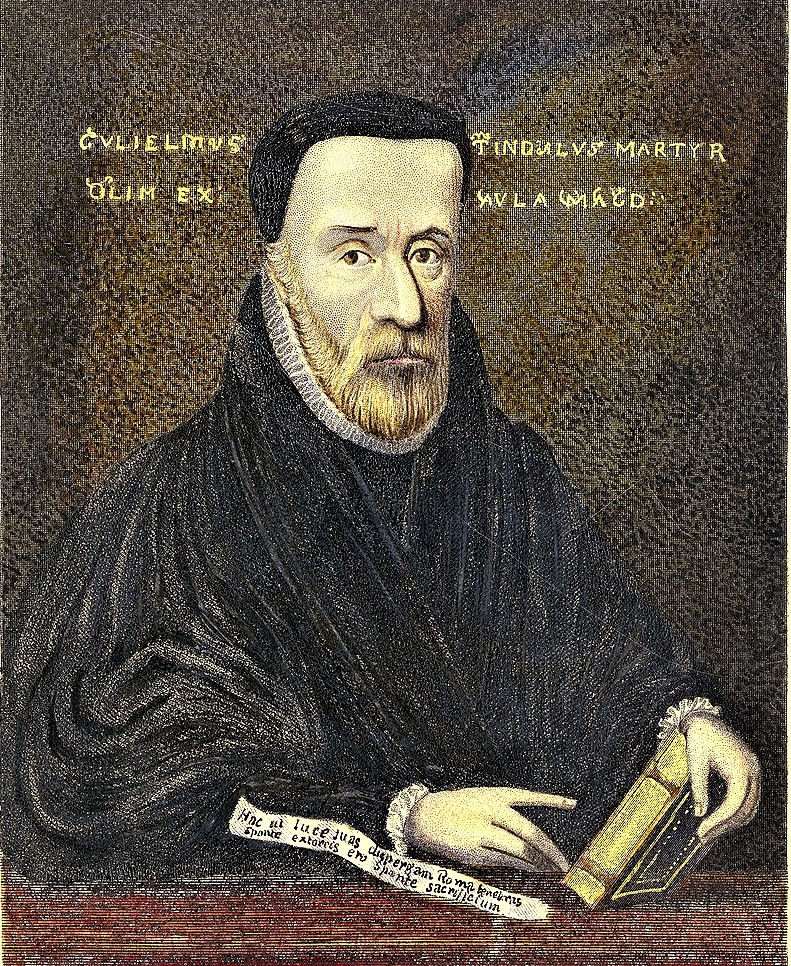 William Tyndale (c.1494-1536) who translated the Bible from the original Hebrew and Greek into English.

In Holland, Rogers became friends with William Tyndale (1494-1536), a reformer who was translating the Bible into English. Tyndale converted Rogers to Protestant views & Rogers married. Nine months later, Tyndale went to prison; he would be executed as a heretic. But Tyndale left a precious manuscript in John Rogers's keeping. This was his English translation of the books from Joshua to Chronicles which had not yet been printed.  Rogers was determined to see that Tyndale's valuable work was not lost. For the next twelve months he labored to put together a complete Bible. Its text was based on Tyndale & Coverdale, & its two thousand notes were borrowed from the writings of dozens of different reformers who were active on the Continent.  Tyndale had been declared a heretic, & his name could not go on the Bible. Rogers could not honestly claim the work as his own, & so he used a pseudonym--Thomas Matthews. When Bishop Cranmer saw a copy of the new Bible, he was so excited that he asked Chancellor Thomas Cromwell to see if the king would license it. Henry VIII did, & the Matthew Bible became the first officially authorized version in the English language.

After only 5 years as priest in the Roman Catholic Church, in 1526 William Tyndale had been first to bring holy scriptures to the common man all in English. He was quoted as saying: "I defy the Pope & all his laws. If God spare my life, ​ere many years I will cause a boy who drives the plow to know more of the scriptures than you do!" 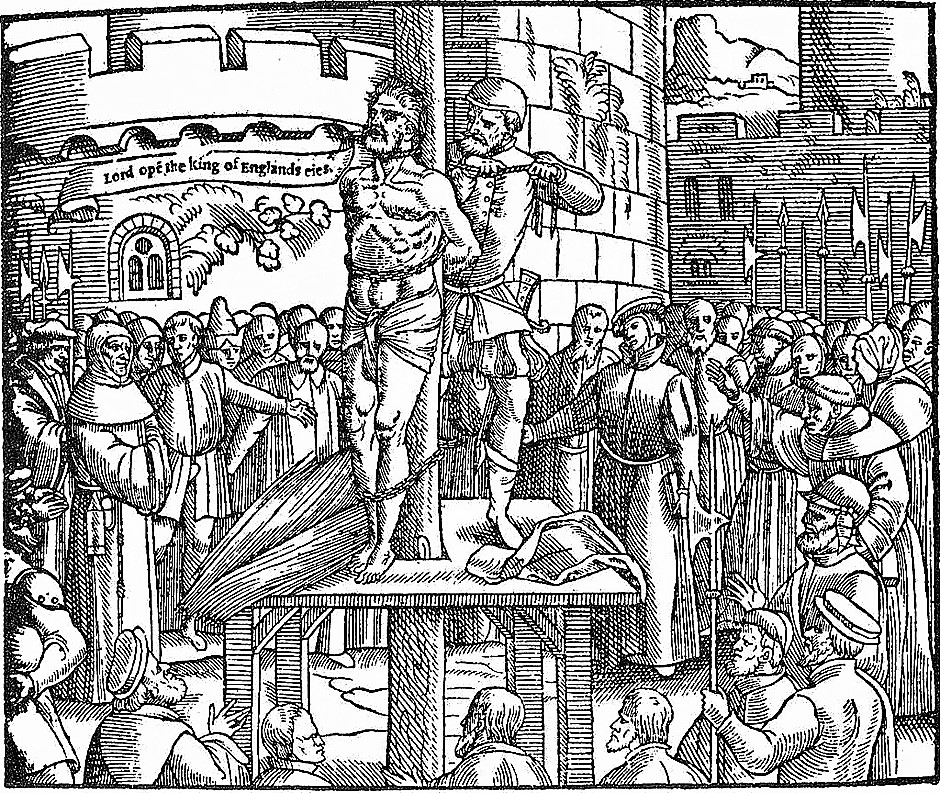 Tyndale, before being strangled and burned at the stake, cried out, "Lord, open the King of England's eyes". Woodcut from Foxe's Book of Martyrs (1563).

While William Tyndale was held for 18 months in the castle dungeon before his trial for heresy for printing the Latin Bible to English; he wrote a letter stating the following:​
"First, faith alone justifies.
"Second, to believe in the forgiveness of sins, & to embrace the mercy offered in the gospel, was enough for salvation.
"Third, human traditions cannot bind the conscience, except where their neglect might occasion scandal.
"Fourth, he denied the freedom of the will.
"Fifth, he denied that there is any purgatory.
"Sixth, neither the Virgin nor the Saints pray for us in their own person.
"Seventh, neither the Virgin nor the Saints should be invoked by us." ​

In August 1536, AD William had been convicted as being a heretic at a pageant of casting him out of the Church. In the town square a crowd gathered. The great doctors & dignitaries assembled in due pomp & array taking ​their seats on the high platform. Tyndale was led out, wearing his priest's robes. He was made to kneel & his hands were scraped with a knife or a piece of glass as a symbol of having lost the benefits of the anointing oil with which he was consecrated to the priesthood, he was tied to a stake & burned.

After sickly Edward VI became king of England, John Rogers returned from the continent, fetching his wife to England. He was given high positions in the Church of England.  Edward VI died. Mary, a Roman Catholic, became queen. John Rogers preached a stirring message, urging his congregation to remain loyal to Reformation principles. Mary's Catholic bishops questioned him about this sermon, but he answered well & was released.  However, when a Catholic was appointed to speak at Paul's Cross, churchgoers rioted. The Mayor was present & could not restore order.  The mob attacked Bishop Bonner, an eminent supporter of Queen Mary. Rogers shouted to the crowd to calm down & helped hustle Bonner to safety. Although no harm was done, the Queen's council was upset. They instructed the Mayor to prove he could keep order, or said he must give up his office. The Mayor arrested Rogers, the one who had saved Bonner's life. Rogers spent over a year in prison, questioned several times about his beliefs by Lord Chancellor Stephen Gardiner.

According to Foxe's Book of Martyrs, when the sentence of death was passed, Rogers begged Gardiner to let him speak a few words to his wife. Gardiner refused, telling Rogers he was not legally married because he had once been a priest. However, as Rogers walked to the stake, singing psalms, he saw his wife at the roadside, holding their youngest baby, whom he had never met.  At the stake, Rogers was offered a pardon if only he would recant his beliefs & return to the Catholic church. He refused. The fire was lit & Rogers washed his hands in the flames as though he did not feel them. He was the first of many martyrs in Mary's reign.

Two centuries after John Rogers's execution, his ordeal, with depictions of his wife and ten children added to increase the pathos, became a staple of The New England Primer. The Primer supplemented the picture of Rogers' immolation with a long, versified speech, said to be the dying martyr's advice to his children, which urged them to "Keep always God before your Eyes" and to "Abhor the arrant Whore of Rome, and all her Blasphemies." This recommendation, read by generations of young New Englanders, doubtless helped to fuel the anti-Catholic prejudice that flourished in that region well into the nineteenth century. 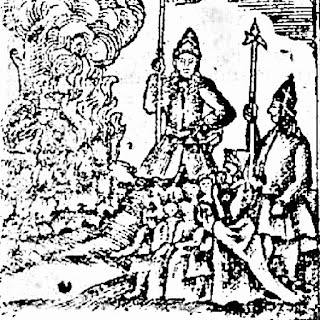