The History & Present State of Virginia, in Four Parts published originally in London in 1705.  Book III Of the Indians, their Religion, Laws, & Customs, in War & Peace
Chapter I. OF THE INDIANS & THEIR DRESS.

§ 1. The Indians are of the middling & largest stature of the English. They are straight & well proportioned, having the cleanest & most exact limbs in the world. They are so perfect in their outward frame, that I never heard of one single Indian that was either dwarfish, crooked, bandy-legged, or otherwise misshapen. But if they have any such practice among them as the Romans had, of exposing such children till they died, as were weak & misshapen at their birth, they are very shy of confessing it, & I could never yet learn that they had.

Their color, when they are grown up, is a chestnut brown & tawny; but much clearer in their infancy. Their skin comes afterwards to harden & grow blacker by greasing & sunning themselves. They have generally coal black hair, & very black eyes, which are most commonly graced with that sort of squint which many of the Jews are observed to have. Their women are generally beautiful, possessing shape & features agreeable enough, & wanting no charm but that of education & a fair complexion. 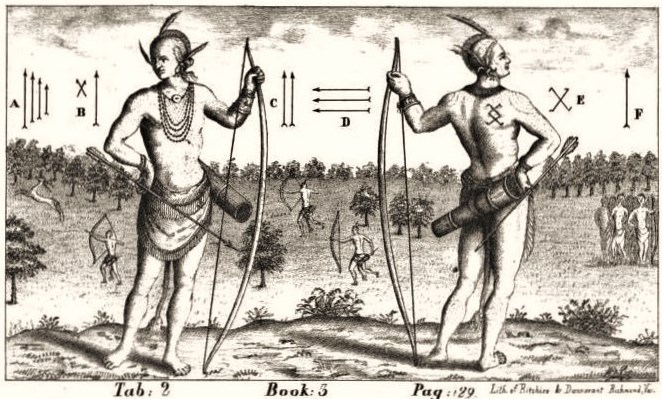 Indian man in his summer dress
§ 2. The men wear their hair cut after several fanciful fashions, sometimes greased, & sometimes painted. The great men, or better sort, preserve a long lock behind for distinction. They pull their beards up by the roots with musselshells, & both men & women do the same by the other parts of their body for cleanliness sake. The women wear the hair of the head very long, either hanging at their backs, or brought before in a single lock, bound up with a fillet of peak, or beads; sometimes also they wear it neatly tied up in a knot behind. It is commonly greased, & shining black, but never painted.

The people of condition, of both sexes, wear a sort of coronets on their heads, from four to six inches broad, open at the top, & composed of peak, or beads, or else of both interwoven together, & worked into figures, made by a nice mixture of the colors. Sometimes they wear a wreath of died furs, as likewise bracelets on their necks & arms. The common people go bareheaded, only sticking large shining feathers about their heads, as their fancies lead them.

§ 3. Their clothes are a large mantle, carelessly wrapped about their bodies, & sometimes girt close in the middle with a girdle. The upper part of this mantle is drawn close upon the shoulders, & the other hangs below their knees. When that's thrown off, they have only for modesty sake a piece of cloth, or a small skin tied round their waist, which reaches down to the middle of the thigh. The common sort tie only a string round their middle, & pass a piece of cloth or skin round between their thighs, which they turn at each end over the string.

Their shoes, when they wear any, are made of an entire piece of buckskin, except when they sew a piece to the bottom to thicken the sole. They are fastened on with running strings, the skin being drawn together like a purse on the top of the foot, & tied round the ankle. The Indian name of this kind of shoe is, moccasin.

But because a draught of these things will inform the reader more at first view than a description in many words, I shall present him with the following prints drawn by the life.

Tab. II. is an Indian man in his summer dress. The upper part of his hair is cut short to make a ridge, which stands up like the comb of a cock, the rest is either shorn off, or knotted behind his ear. On his head are stuck three feathers of the wild turkey, pheasant, hawk, or such like. At his ear is hung a fine shell with pearl drops. At his breast is a tablet, or fine shell, smooth as polished marble, which sometimes also hath etched on it a star, half moon, or other figure, according to the maker's fancy. Upon his neck & wrists hang strings of beads, peak & roenoke. His apron is made of a deer skin, gashed round the edges, which hang like tassels or fringe; at the upper end of the fringe is' an edging of peak, to make it finer. His quiver is of a thin bark; but sometimes they make it of the skin of a fox, or young wolf, with the head hanging to it, which has a wild sort of terror in it; & to make it yet more warlike, they tie it on with the tail of a panther, buffalo, or such like, letting the end hang down between their legs. The pricked lines on his shoulders, breast & legs, represent the figures painted thereon. In his left hand he holds a bow, & in his right an arrow. The mark upon his shoulderblade is a distinction used by the Indians in traveling, to show the nation they are of; & perhaps is the same with that which Baron Lahontan calls the arms & heraldry of the Indians. Thus the several lettered marks are used by several other nations about Virginia, when they make a journey to their friends & allies.The landscape is a natural representation of an Indian field. 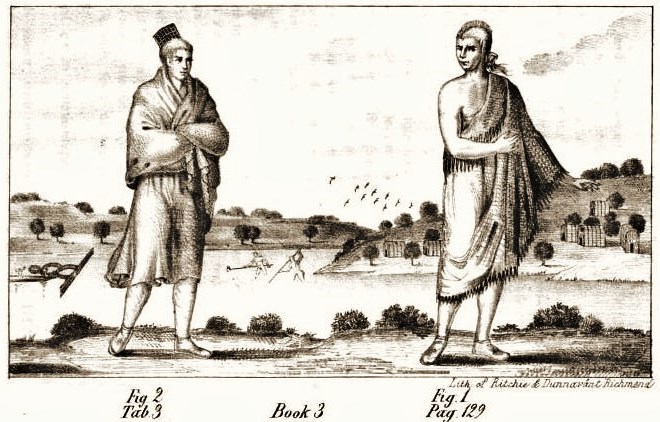 Tab. Ill is two Indian men in their winter dress. Seldom any but the elder people wore the winter cloaks (which they call match-coats) till they got a supply of European goods; & now most have them of one sort or other in the cold winter weather. Fig. 1 wears the proper Indian match-coat, which is made of skins, dressed with the fur on, sewed together, & worn with the fur inwards, having the edges also gashed for beauty's sake. On his feet are moccasins. By him stand some Indian cabins on the banks of the river. Fig. 2 wears the Duffield match-coat bought of the English; on his head is^a coronet of peak, on his legs are stockings made of Duffields: that is, they take a length to reach from the ankle to the knee, so broad as to wrap round the leg; this they sew together, letting the edges stand out at an inch beyond the seam. When this is on, they garter below knee, & fasten the lower end in the moccasin.

§4.1 don't find that the Indians have any other distinction in their dress, or the fashion of their hair, than only what a greater degree of riches enables them to make, except it be their religious persons, who are known by the particular cut of the hair & the unusual figure of their garments; as our clergy are distinguished by their canonical habit.

The habit of the Indian priest is a cloak made in the form of a woman's petticoat; but instead of tieing it about their middle, they fasten the gatherings about their neck & tie it upon the right shoulder, always keeping one arm out to use upon occasion. This cloak hangs even at the bottom, but reaches no lower than the middle of the thigh; but what is most particular in it is, that it is constantly made of a skin dressed soft, with the pelt or fur on the outside, & reversed ; insomuch, that when the cloak has been a little worn the hair falls down in flakes, & looks very shagged & frightful.
The cut of their hair is likewise peculiar to their function; for 'tis all shaven close except a thin crest, like a cock's comb, which stands bristling up, & runs in a semicircle from the forehead up along the crown to the nape of the neck. They likewise have a border of hair over the forehead, which by its own natural strength, & by the stiffening it receives from grease & paint, will stand out like the peak of a bonnet. 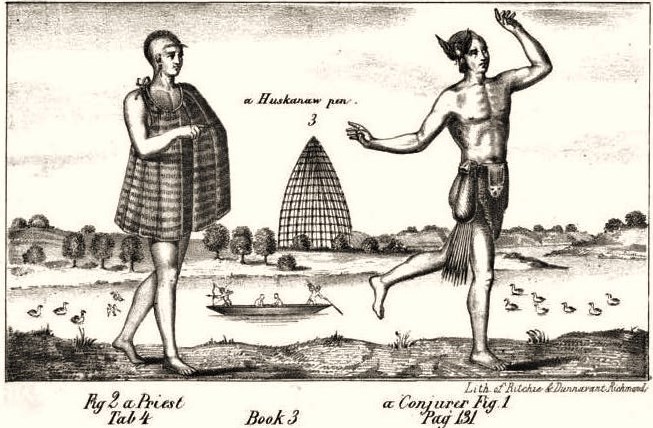 Tab. IV. Is a priest & a conjurer in their proper habits. The priest's habit is sufficiently described above. The conjurer shaves all his hair off, except the crest on the crown; upon his ear he wears the skin of some dark colored bird ; he, as well as the priest, is commonly grimed with soot or the like; to save his modesty he bangs an otter skin at his girdle, fastening the tail between his legs; upon his thigh hangs his pocket, which is fastened by tucking it under his girdle, the bottom of this is likewise fringed with tassels for ornament sake. In the middle between them is the Huskanawpen spoken of §32.

§5. The dress of the women is little different from that of the men, except in the tieing of their hair. The women of distinction wear deep necklaces, pendants & bracelets, made of small cylinders of the conch shell, which they call peak: they likewise keep their skin clean & shining with oil, while the men are commonly bedaubed all over with paint.

They are remarkable for having small round breasts, & so firm, that they are hardly ever observed to hang down, even in old women. They commonly go naked as far as the navel downward, & upward to the middle of the thigh, by which means they have the advantage of discovering their fine limbs & complete shape. 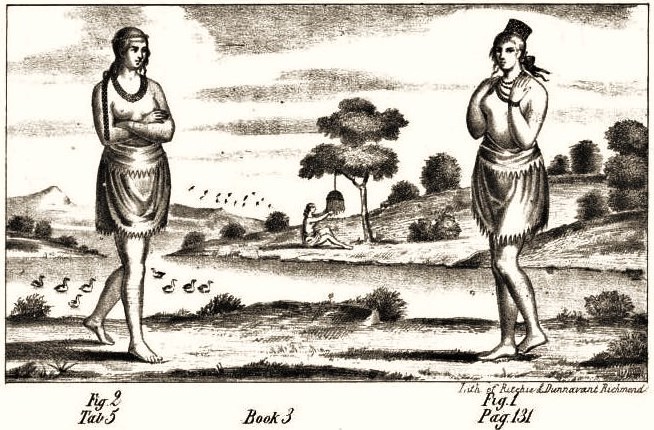 Tab. V. Is a couple of young women. The first wearing a coronet, necklace & bracelet of peak; the second a wreath of furs on her head, & her hair is bound with a fillet of peak & beads. Between the two is a woman under a tree making a basket of silk grass after their own manner.

Tab. VI. Is a woman & a boy running after her. One of her hands rests in her necklace of peak, & the other holds a gourd, in which they put water or other liquid. 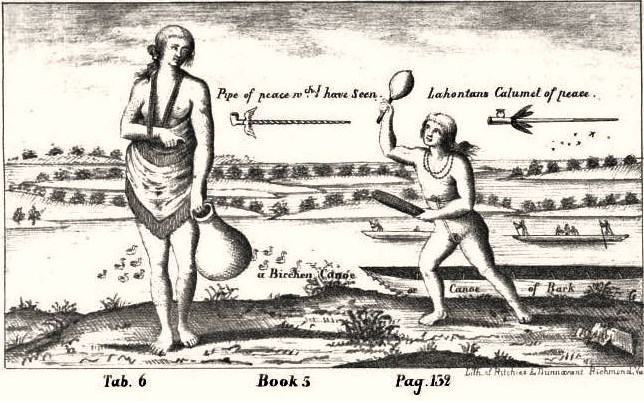 The boy wears a necklace of runtees, in his right hand is an Indian rattle, & in his left a roasting ear of corn. Round his waist is a small string, & another brought cross through his crotch, & for decency a soft skin is fastened before. Runtees are made of the conch shell as the peak is, only the shape is flat & round like a cheese, & drilled edge ways.
Posted by Barbara Wells Sarudy at 4:00 AM