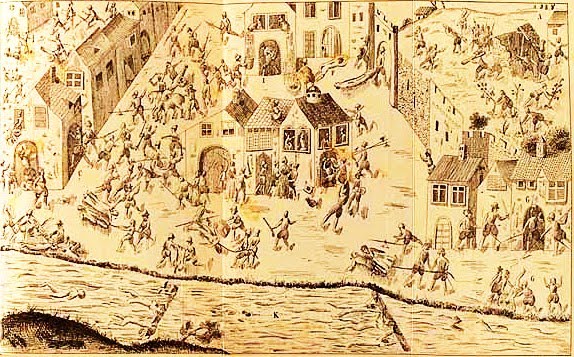 Persecution of Huguenots by Catholics

The slaughter of Huguenots (French Protestants) by Catholics at Sens, Burgundy in 1562 occurred at the beginning of more than thirty years of religious strife between French Protestants and Catholics. These wars produced numerous atrocities. The worst was the notorious St. Bartholomew's Day Massacre in Paris, August 24, 1572. Thousands of Huguenots were butchered by Roman Catholic mobs. Although an accommodation between the two sides was sealed in 1598 by the Edict of Nantes, religious privileges of Huguenots eroded during the seventeenth century and were extinguished in 1685 by the revocation of the Edict. Perhaps as many as 400,000 French Protestants emigrated to various parts of the world, including the British North American colonies.

In 1562 French naval officer Jean Ribault led an expedition to the New World that founded Fort Caroline as a haven for Huguenots in what is now Jacksonville, Florida. Trying to keep control of La Florida, Spanish soldiers killed Ribault and many of his followers near St. Augustine in 1565.

Barred by the government from settling in New France, Huguenots led by Jessé de Forest, sailed to North America and settled instead in the Dutch colony of New Netherland (later incorporated into New York and New Jersey); as well as Great Britain's colonies, including Nova Scotia. A number of New Amsterdam's families were of Huguenot origin, often having emigrated as refugees to the Netherlands in the previous century. In 1628 the Huguenots established a congregation as L'Église française à la Nouvelle-Amsterdam (the French church in New Amsterdam). This parish continues today as L'Eglise du Saint-Esprit, part of the Episcopal (Anglican) communion, and welcomes Francophone New Yorkers from all over the world. Services are conducted in French for a Francophone parish community, and members of the Huguenot Society of America. The liturgy and doctrines have nothing to do with Huguenot practices and polity, as it is Episcopal in character. Upon their arrival in New Amsterdam, Huguenots were offered land directly across from Manhattan on Long Island for a permanent settlement and chose the harbor at the end of Newtown Creek, becoming the first Europeans to live in Brooklyn, then known as Boschwick, and today the neighborhood known as Bushwick.
Jean Hasbrouck House (1721) on Huguenot Street in New Paltz, New York

Huguenot immigrants founded New Paltz, New York. They built what is now the oldest street in the current United States of America with the original stone houses, which is a National Historic Landmark District. They also founded New Rochelle (named after La Rochelle in France), New York. Louis DuBois, son of Chretien DuBois, was one of the original Huguenot settlers in this area, along with the Daniel Perrin family. In 1692 Huguenots settled on the south shore of Staten Island, New York. The present-day neighbourhood of Huguenot was named for those early settlers. A town near Port Jervis, New York is named Huguenot.

Some Huguenot immigrants settled in Central Pennsylvania. They assimilated with the predominately Pennsylvania German settlers of the area.

In 1700 several hundred French Huguenots migrated from England to the colony of Virginia, where the English Crown had promised them land grants in Lower Norfolk County. When they arrived, colonial authorities offered them instead land 20 miles above the falls of the James River, at the abandoned Monacan village known as Manakin Town, now in Powhatan County. Some settlers landed in present-day Chesterfield County. On 12 May 1705, the Virginia General Assembly passed an act to naturalise the 148 Huguenots still resident at Manakintown. Of the original 390 settlers in the isolated settlement, many had died; others lived outside town on farms in the English style; and others moved to different areas.[43] Gradually they intermarried with their English neighbors. Through the 18th and 19th centuries, descendants of the French migrated west into the Piedmont, and across the Appalachian Mountains into the West of what became Kentucky, Tennessee, Missouri, and other states. In the Manakintown area, the Huguenot Memorial Bridge across the James River and Huguenot Road were named in their honor, as were many local features, including several schools, including Huguenot High School.
French Protestant (Huguenot) Church, downtown Charleston, South Carolina,

In the early years, many Huguenots also settled in the area of present-day Charleston, South Carolina. In 1685, Rev. Elie Prioleau from the town of Pons in France, was among the first to settle there. He became pastor of the first Huguenot church in North America in that city. After the Revocation of the Edict of Nantes in 1685, several Huguenot families of Norman and Carolingian nobility and descent, including Edmund Bohun of Suffolk England from the Humphrey de Bohun line of French royalty descended from Charlemange, Jean Postell of Dieppe France, Alexander Pepin, Antoine Poitevin of Orsement France, and Jacques de Bordeaux of Grenoble, immigrated to the Charleston Orange district. They were very successful at marriage and property speculation. After petitioning the British Crown in 1697 for the right to own land in the Baronies, they prospered as gentlemen planters on the Goose, Ashpoo, Ashley and Santee River plantations they purchased from the British Landgrave Edmund Bellinger. Some of their descendants moved into the Deep South and Texas, where they developed new plantations. The French Huguenot Church of Charleston, which remains independent, is the oldest continuously active Huguenot congregation in the United States. Founded in 1628, L'Eglise du Saint-Esprit in New York is older, but it left the French Reformed movement in 1804 to become part of the Episcopal Church.

Most of the Huguenot congregations (or individuals) in North America eventually affiliated with other Protestant denominations with more numerous members. The Huguenots adapted quickly and often began to marry outside their immediate French communities fairly rapidly, which led to their assimilation.[44] Their descendants in many families continued to use French first names and surnames for their children well into the nineteenth century, as they tried to keep some connection to their heritage. Assimilated, the French made numerous contributions to United States economic life, especially as merchants and artisans in the late Colonial and early Federal periods. For example, E.I. du Pont, a former student of Lavoisier, established the Eleutherian gunpowder mills, which produced material for the American Revolutionary War.

Paul Revere was descended from Huguenot refugees, as was Henry Laurens, who signed the Articles of Confederation for South Carolina; Jack Jouett, who made the ride from Cuckoo Tavern to warn Thomas Jefferson and others that Tarleton and his men were on their way to arrest him for crimes against the king; Francis Marion, and a number of other leaders of the American Revolution and later statesmen. The last active Huguenot congregation in North America worships in Charleston, South Carolina, at a church that dates from 1844. The Huguenot Society of America maintains Manakin Episcopal Church in Virginia as an historic shrine with occasional services.
Posted by Barbara Wells Sarudy at 4:00 AM