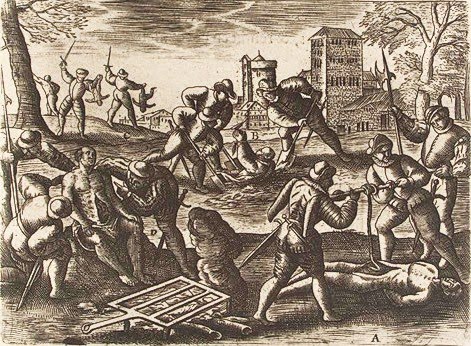 Persecution of Catholics by Huguenots

Huguenots became known for their harsh criticisms of doctrine and worship in the Catholic Church from which they had broken away. In particular they criticised the sacramental rituals of the Church and what they viewed as an obsession with death and the dead. They believed that the ritual, images, saints, pilgrimages, prayers, and hierarchy of the Catholic Church did not help anyone toward redemption. They saw Christian life as something to be expressed as a life of simple faith in God, relying upon God for salvation, and not upon the Church's sacraments or rituals, while obeying Biblical law.

Like other religious reformers of the time, they felt that the Catholic Church needed radical cleansing of its impurities. They thought the Pope ruled the Church as if it was a worldly kingdom, and was ultimately doomed. Rhetoric like this became fiercer as events unfolded, and eventually stirred up a reaction in the Catholic establishment.

The Catholic Church in France and many of its members opposed the Huguenots. Some Huguenot preachers and congregants were attacked as they attempted to meet for worship. The height of this persecution was the St. Bartholomew's Day massacre when 5,000 to 30,000 were killed, although there were also underlying political reasons for this as well, as some of the Huguenots were nobles trying to establish separate centers of power in southern France. Retaliating against the French Catholics, the Huguenots had their own militia.

In the areas of France they controlled, Huguenots at least matched the harshness of the persecutions of their Catholic opponents. In the above image, Atrocities A, B, and C, depictions that are possibly exaggerated for use as propaganda, are located by the author in St. Macaire, Gascony. In scene A, a priest is disemboweled, his entrails wound up on a stick until they are torn out. In illustration B a priest is buried alive, and in C Catholic children are hacked to pieces. Scene D, alleged to have occurred in the village of Mans, was "too loathsome" for 19C commentator to translate from the French. It shows a priest whose genitalia were cut off and grilled. Forced to eat his roasted private parts, the priest was then dissected by his torturers, so they could observe him digesting his meal.
Posted by Barbara Wells Sarudy at 4:00 AM