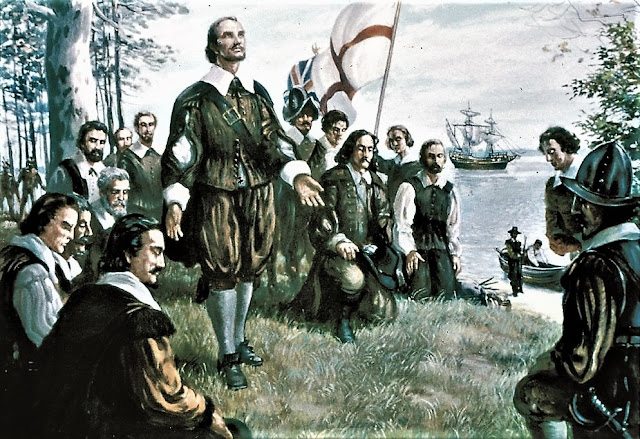 "First Thanksgiving" by Sidney King.  The weary sailors rowed to shore and surveyed the landscape of their new settlement. As instructed by the Berkeley Company, the men, led by their leader, Captain John Woodlief, knelt on the dried grass to offer a prayer of thanks for their safe journey across the ocean. They prayed: “We ordain that the day of our ship’s arrival, at the place assigned for plantation, in the land of Virginia, shall be yearly and perpetually kept holy as a day of thanksgiving to Almighty God.”

"...A year and 17 days before those Pilgrims ever stepped foot upon New England soil, a group of English settlers led by Captain John Woodlief landed at today’s Berkeley Plantation, 24 miles southwest of Richmond. After they arrived on the shores of the James River, the settlers got on their knees & gave thanks for their safe passage. There was no traditional meal, no lovefest with Native Americans, no turkey. America’s first Thanksgiving was about prayer, not food.

"On September 16th, 1619, the Margaret departed Bristol, England, bound for the New World. Aboard the 35-foot-long ship were 35 settlers, a crew, five “captain’s assistant”, a pilot, & Capt. Woodlief, a...survivor of the 1609/1610 Jamestown’s “Starving Time.” The mission of those aboard Margaret was to settle 8,000 acres of land along the James River that had been granted to them by the London-based Berkeley Company. They were allowed to build farms, storehouses, homes, & a community on company land. In exchange, they were contracted as employees, working the land & handing over crops & profits to the company.

"After a rough two-&-a-half months on the Atlantic, the ship entered the Chesapeake Bay on November 28, 1619. It took another week to navigate the stormy bay, but they arrived at their destination, Berkeley Hundred, later called Berkeley Plantation, on December 4. They disembarked & prayed. Many historians think there was nothing but old ship rations to eat, so the settlers may have concocted a meal of oysters & ham out of necessity rather than celebration. At the behest of written orders given by the Berkeley Company to Captain Woodlief, it was declared that their arrival must “be yearly & perpetually kept holy as a day of Thanksgiving to Almighty God.” And that’s exactly what they did–for 2 years. On March 22, 1622, the Powhatan, who’d realized the settlers intended to expand their territory & continue their attempts to convert & “civilize” them, attacked Berkeley & other settlements, killing 347. Woodlief survived, but soon after, Berkeley Hundred was abandoned. For 3 centuries, Virginia’s 1st Thanksgiving was lost to history.

"Graham Woodlief is a direct descendant of Captain Woodlief. While he’s known his family’s history since being a teenager; he’s devoted a considerable amount of energy to research, since he retired in 2009. Today, Woodlief is president of the Virginia Thanksgiving Festival, which has been held annually since 1958. Woodlief ...thinks the major reason that Plymouth, & not Berkeley, is...thought to be the site of the 1st Thanksgiving is that “they had better PR than we did.” He also said the emphasis on prayer, instead of Plymouth’s festive harvest meal, also made Virginia’s Thanksgiving a bit less appealing, though more accurate. “In fact, most Thanksgivings in the early days were religious services, not meals,” Woodlief says.

"Nearly 309 years after the 1622 battle with the Powhatans, Berkeley Plantation’s missing history was rediscovered. In 1931, retired William & Mary President (and son of President John Tyler) Dr. Lyon G. Tyler was working on a book about early Virginia history. While doing research, he stumbled upon the Nibley Papers, documents and records taken by John Smyth of Nibley, Gloucestershire, about the 1619 settlement of Berkeley. Originally published by the New York State Library in 1899, the papers’ historical significance had gone undetected. According to many Virginia historians, the papers are concrete proof that the New World’s “day of Thanksgiving” originated in their region. Upon his discovery, Tyler told Malcolm Jamieson, who had inherited Berkeley plantation in the 1920s. The plantation was already considered one of the more historic homes in the state, once a residence to a signer of the Declaration of Independence, as well as the birthplace of a US President. Now, it had another feather in its historic hat. Jamieson, with the help of descendants of Captain Woodlief, instituted the 1st Virginia Thanksgiving Festival in 1958. Its been celebrated ever since...

"In Kennedy’s 1963 Thanksgiving Proclamation (made 17 days before his assassination), the president acknowledged Virginia’s claim, saying “Over three centuries ago, our forefathers in Virginia and in Massachusetts, far from home in a lonely wilderness, set aside a time of thanksgiving.” In 2007, President George W. Bush also noted the history while visiting Berkeley Plantation, commenting that, “The good folks here say that the founders of Berkeley held their celebration before the Pilgrims had even left port. As you can imagine, this version of events is not very popular up north.”

"The Berkeley Company, in England, had been given a grant of 8,000 acres, by King James I in Virginia, along the James River. England was going through a severe recession, especially in the woolen industry, & Englishmen were flocking to America to escape religious persecution & for a better life. The English town of Berkeley, a center for the woolen industry, was especially hard-hit by the recession.  The 4 adventurers who made up the Berkeley Company were William Throckmorton, John Smythe, George Thorpe, & Richard Berkeley, who owned Berkeley castle. They needed a leader for an expedition to Virginia & chose Capt. John Woodlief. He had been to the New World several times & had survived the starving time at Jamestown.  With a passenger list of 35 able-bodied craftsmen & a ship’s crew of 19, Woodlief headed to the New World. They sailed on the Margaret, a small ship that was only 35 feet long & weighed 47 tons, loaded with cargo. It was a perilous journey across the Atlantic, for 2 & a half months. They were plagued by storms, the men were homesick, conditions were claustrophobic, there was vermin infestation. They prayed constantly.

"The Margaret landed at Berkeley Hundred on Dec. 4, 1619. The men rowed ashore & surveyed the wintery landscape that surrounded them. As they were instructed by the Berkeley Company, the men knelt & gave thanks for their safe voyage across the ocean.  They were given a proclamation, by the Berkeley Company, when they departed England, with 10 specific instructions.  The first instruction was that they pray & give thanks for their safe voyage when they landed. And they were to do so perpetually & annually. It is thought the Englishmen gave thanks the next 2 years, as they were instructed, until the settlement was destroyed in 1622. It was the 1st Thanksgiving by Englishmen in the New World, 1 year & 17 days before the Pilgrims landed in Massachusetts. It was considered “official,” as they were ordered by England to give thanks — & it was planned, not spontaneous, as many Thanksgivings in the New World were. It was also not a one-time celebration, but repeated annually, as the Englishmen were instructed."
Posted by Barbara Wells Sarudy at 5:20 AM