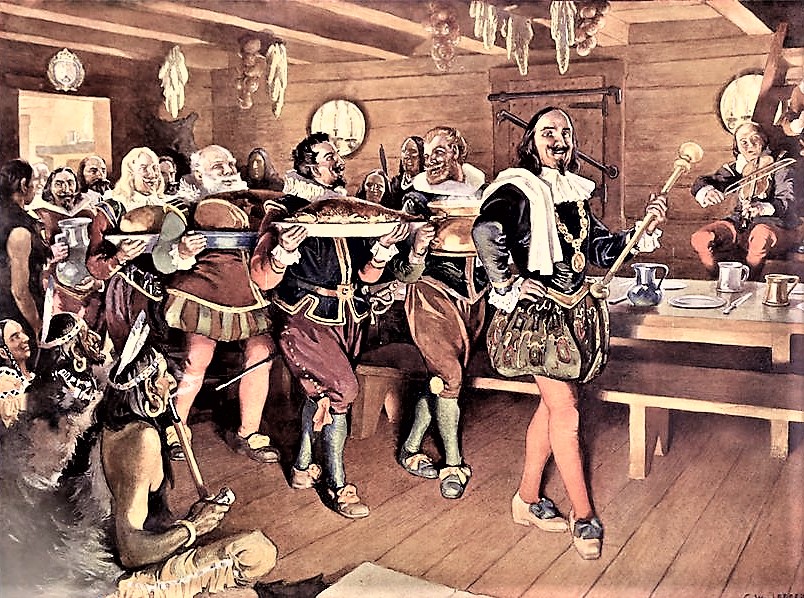 In 1578, English explorer Martin Frobisher landed in what is now Newfoundland & Labrador, Canada, as part of his quest to locate the fabled Northwest Passage. In response to his safe travels to the Great White North, over 4 decades before the Plymouth Colony celebration, Frobisher & his men held a service of thanks. "Frobisher, an English explorer in the uncharted northern territories, organized the 1st religious Thanksgiving for his crew & early Canadian settlers as a way to take stock of all they had accomplished in a short time." During his 1578 voyage to Baffin Island to set up a new English colony, Frobisher's ships were scattered. At Frobisher Bay, the explorer was happily reunited with his fleet, & all who had survived the storms honored their reunion with a day of thanks.

Many claim that the 1st Thanksgiving in North America was held by Sir Martin Frobisher & his crew in Newfoundland in 1578. Giving thanks was an important aspect of Elizabethan society, so it would have been a natural thing for him & his men to do.  Sir Martin Frobisher, mariner, explorer, 3 three voyages from England to the “New World” in search of a passage to Asia. He was the 1st European to discover the bay that is named for him & returned with tons of dirt that he thought contained gold. Each expedition was bigger than the preceding one & on his 3rd, in 1578, he commanded a flotilla of 15 ships & more than 400 men. They set sail on 31 May for Baffin Island, where they intended to establish a gold mining operation & the 1st English colony in North America. On 1 July, they sighted Resolution Island, but they were driven by storms across the entrance to Hudson Strait. The fleet was dispersed & one ship, which carried their prefabricated barracks, was sunk by ice. Another ship deserted the flotilla & sailed back to England. The remaining ships assembled at the Countess of Warwick’s Island, which is known today as Kodlunarn Island, a tiny speck of land in Frobisher Bay. They established 2 mines on the island & set up shops to test the ore from other mines. The mine sites & the ruins of a stone house are still clearly visible.  Vicious storms blew the fleet around Hudson Strait for most of July & when they finally assembled at their anchorage in Frobisher Bay, they celebrated Communion & formally expressed their thanks through the ship’s Chaplain, Robert Wolfall, who “made unto them a godly sermon, exhorting them especially to be thankefull to God for theyr strange & miraculous deliverance in those so dangerous places” (Richard Collinson, The Three Voyages of Martin Frobisher: In Search of a Passage to Cathaia & India by the North-West, Cambridge University Press, 2010).

While Thanksgiving is traditionally a harvest celebration & Frobisher’s was for a safe arrival, it was undeniably an act of giving thanks, one committed with relief & within the context of their society. Frobisher sailed for Elizabeth I, whose reign was marked by public acts of giving thanks. Elizabeth expressed her gratitude for having lived to ascend the throne, for delivery from the Spanish Armada and, in her last speech to Parliament, for her subjects.  The 1st known use of the word “Thanksgiving” in English text was in a translation of the bible in 1533, which was intended as an act of giving thanks to God. The tradition of gratitude was continued each fall as people gave thanks for the harvest that would see them through the winter.
Edited from The Canadian Encyclopedia.
Posted by Barbara Wells Sarudy at 5:05 AM