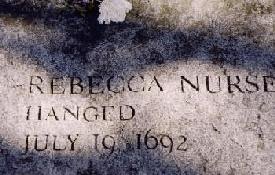 Rebecca Nurse, "Oh Lord, help me! It is false. I am clear. For my life now lies in Your Hands..."

Rebecca Nurse (1621-1692), victim of the Salem witchcraft delusion, was born at Great Yarmouth, England, the oldest child of William & Joanna (Blessing) Towne. When she was about 20, the family came to America & settled in Salem, Mass. There Rebecca married Francis Nurse, a woodworker & “tray maker.” His affairs prospered, & he was able to buy a rich 300-acre farm in Salem Village (later Danvers), to which they removed in 1678.

As their 8 children-Rebecca, Sarah, John, Samuel, Mary, Elizabeth, Francis & Benjamin- married, they were given land & houses on this property; so that by 1692, the old couple were surrounded by a brood of loyal descendants. Throughout her life Rebecca Nurse took particular pains in the education of her children. Though a member of the Salem Town Church, she usually attended the Rev. Samuel Parris’ church in nearby Salem Village, where she was seated (on the women’s side) with the Widow Putnam, matriarch of the most powerful local family, an indication of her respected place in the community.

As 1692 began, little but the infirmities of age, especially a growing deafness, disturbed the peaceful tenor of Rebecca Nurse’s life. In February of that year, however, several high-strung girls & women in the households of Samuel Parris & Thomas Putnam began to have hysterical outbursts, which were readily attributed to witchcraft. The important role of the Devil in Puritan theology made Massachusetts highly vulnerable to this still widely believed superstition, particularly at a time when Satan’s hand seemed so evident in the revocation of the colony’s charter, in Indian warfare, & in the decline of religious zeal. Furthermore, Salem Village, had special afflictions, including a divided congregation & land disputes involving the Putnams, the Nurse clan, & others.

When 3 accused witches were arrested, Rebecca Nurse took a guarded stand against the action, averring “that there was persons spoken of [as witches] that were as innocent as she was.” While the Rev. Mr. Parris & others fanned the flames of emotion she absented herself from meeting, & from the magistrates’ examinations of the accused. Consequently, when Mrs. Ann Putnam, Mrs. Putnam’s daughter (also named Ann), & others continued to suffer mysterious seizures, they readily added Rebecca Nurse to the list of their tormentors.

She was arrested on Mar. 24, 1692. The next day, when she was examined by 2 magistrates, “the great noise of the afflicted,” rolling about in their fits & howling accusations against her, was such that Samuel Parris, acting as clerk, admitted his inability to hear all the testimony. A man walking some distance from the meetinghouse later reported that he had never heard “such an hideous scrietch & noise” (Burr, p. 159). Undeterred, Mrs. Nurse earnestly professed her innocence. Great pressure was brought upon all the accused to plead their guilt, & in the outcome no “witch” who confessed was executed. However, neither Rebecca Nurse nor her 2 sisters who were also arrested would ever do so, refusing to “belay their souls.”

From March to June, Mrs. Nurse lay in chains in filthy & verminous jails in Salem & Boston, enduring false testimony, the mockery of visitors, & the humiliating search for “witches’ marks” on her body without losing her composure of her faith in God’s ultimate justice. The punishment for witchcraft was clearly set forth, in the Old Testament command “Thou shalt not suffer a witch to live,” & in May 1692 a special Court of Oyer & Terminer, comprising 7 eminent men of Massachusetts, was established at Salem to execute this stern injunction upon the rapidly growing group of the accused. The first to be tried, Bridget Bishop, was hanged on June 10.

The trial or Rebecca Nurse came next, on June 30. Unlike some of the accused, she was unfailingly supported by her husband, her family, & many friends, & for a time it appeared that she might be cleared. Forty citizens of Salem Village, including 7 members of the Putnam family, signed petitions of her behalf. Although the trial gave full weight to the “spectral” evidence of those who testified to visits from her “shape,” the jury at first returned a verdict of not guilty. At this the “afflicted” girls in the courtroom began howling, moaning, & twitching, & the stern William Stoughton, chief justice of the court & lietenant governor of the Commonwealth, urged the jurymen to reconsider. They did so, but again returned, this time requesting that Mrs. Nurse be asked to explain one of her remarks. She was asked but, being deaf, did not hear the request & sat in silence. Now at last the jury brought in a guilty verdict, & Mrs. Nurse was sentenced to hang. Her family submitted to the court a deposition explaining her silence at the critical moment, as well as the innocuous meaning of the queried statement, but to no avail. They next petitioned the governor, Sir William Phips, for a reprieve, which was at first granted. Unnamed “Salem gentlemen” intervened, however, & the reprieve was withdrawn. On July 3, in her presence, an edict of excommunication was pronounced against Rebecca Nurse in the Salem church. About two weeks later she & 4 others were hanged on “Gallows Hill” in Salem. The bodies were at first placed in a common grave near the gallows.

Eleven more hangings-including those of Martha Corey & Mary Esty, Mrs. Nurse’s sister-occurred before the hysteria ran its course. None of those executed in 1692 had as much said in her favor & as little against her as did Rebecca Nurse, & the Nurse family continued to work for her vindication after her death. They refused reconciliation with Samuel Parris, & in 1696, for this & other reasons, Parris left the ministry. 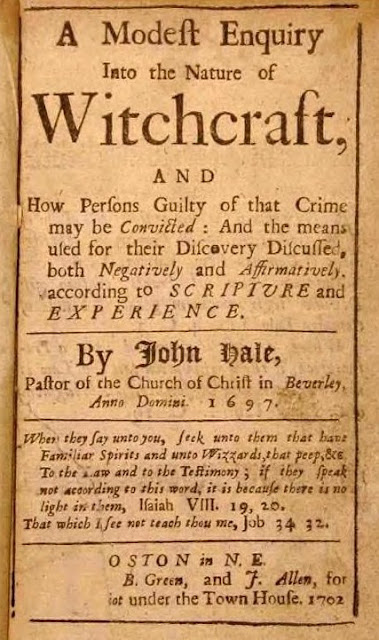 In 1706 young Ann Putnam, seeking church membership was forced publicly to confess that it was “a great delusion of Satan that deceived me in that sad time;” she asked especial forgiveness for her accusations against Rebecca Nurse. Five years later the Massachusetts legislature reversed the convictions of Mrs. Nurse, her sister, & 12 others whose families had also petitioned. At last, in 1712, after 20 years, the Salem church revoked the excommunication of their former member “that it may no longer be a reproach to her memory & an occasion of grief to her children.” 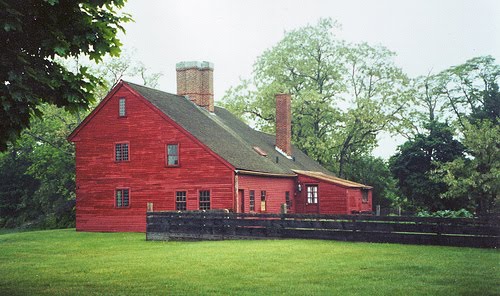 According to descendants, Nurse’s children brought her body back to the property after her execution and buried her somewhere in the family graveyard on the property. In 1885, the Nurse family erected a monument in her memory. The house is still preserved, & two granite shafts mark the traditional burial site, the second commemorating those who signed the petition on her behalf. 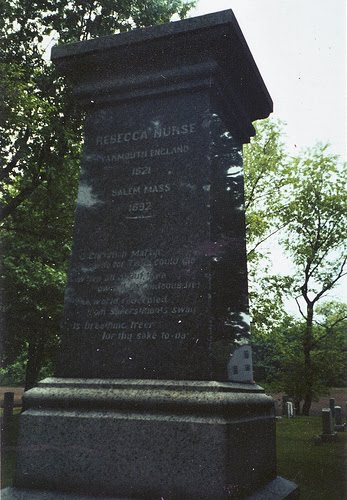 The monument includes a poem by John Greenleaf Whittier:
“O, Christian martyr! who for truth could die,
When all about thee owned the hideous lie!
The world, redeemed from superstition’s sway,
Is breathing freer for thy sake today.”

The other side of the monument reads:
“Accused of witchcraft she declared “I am innocent and God will clear my innocency.”
Once acquitted yet falsely condemned she suffered death July 19, 1692.
In loving memory of her Christian character even then fully attested by
forty of her neighbors This monument is erected July 1885.”

The story of Nurse and her family is the focus of the film Three Sovereigns for Sarah. The Sarah of the title is Sarah Cloyce, and the film follows her quest to clear the names of her executed sisters Mary Easty and Rebecca Nurse.
Note:
The Female Witch Myth was strengthened by English Jurist Matthew Hale (1609-1676), whose writings & court rulings on women were/are far-reaching & long-lasting. In 1662, he was involved in one of the most notorious of the 17C English witchcraft trials, where he sentenced 2 women to death for being witches. The judgment of Hale in this case was extremely influential in future cases in England & in the British American colonies, & was used in the 1692 Salem witch trials to justify the forfeiture of the accused's lands. As late as 1664, Hale used the argument that the existence of laws against witches is proof that witches exist.
Perhaps English Jurist Matthew Hale (1609-1676) read Malleus Maleficarum 1486 (translated by Montague Summers 1928 - see Google Books) Written in Latin & first submitted to the University of Cologne on May 9th, 1487, the title is translated as "The Hammer of Witches." Written in 1486 by Austrian priest Heinrich Kramer (also Kraemer) & German priest Jakob (also James) Sprenger, at the request of Pope Innocent VIII. As the main justification for persecution of witches, the authors relied on a brief passage in the Bible (the book of Exodus, chapter 22, verse 18), which states: "Thou shalt not suffer a witch to live." The Malleus remained in use for 300 years. It had tremendous influence in the witch trials in England & her North American colonies, & on the European continent.
The Malleus was used as a judicial case-book for the detection & persecution of witches, specifying rules of evidence & the canonical procedures by which suspected witches were tortured & put to death. Thousands of people (primarily women) were judicially murdered as a result of the procedures described in the book because of having a strange birthmark, living alone, mental illness, cultivating medicinal herbs, or simply because they were falsely accused (often for financial gain by the accuser). The Malleus serves as a chilling warning of what happens when intolerance takes over a society.