A Short and True Description of New England
by the Rev. Francis Higginson, 1629

Fowls of the air are plentiful here, and of all sorts as we have in England as far as I can learn, and a great many of strange fowls which we know not.
Eagle woodcut from 1577

Whilst I was writing these things, one of our men brought home an eagle which he had killed in the wood. They say they are good meat. Also here are many kinds of excellent hawks, both sea hawks and land hawks.

And myself walking in the woods with another in company, sprung a partridge so big that through the heaviness of his body could fly but a little way. They that have killed them say they are as big as our hens. 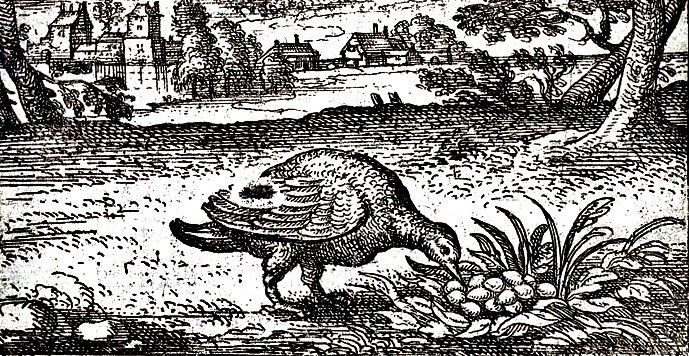 Here are likewise abundance of turkeys often killed in the woods, far greater than our English turkeys, and exceeding fat, sweet and fleshy, for here they have abundance of feeding all the year long, such as strawberries: in summer all places are full of them, and all manner of berries and fruits. 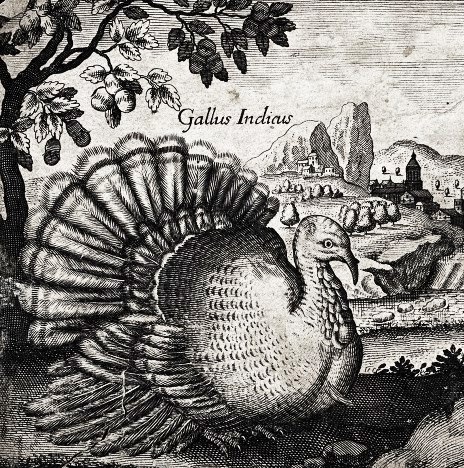 In the winter time I have seen flocks of pigeons, and have eaten of them. They do fly from tree to tree as other birds do, which our pigeons will not do in England. They are of all colors as ours are, but their wings and tails are far longer, and therefore it is likely they fly swifter to escape the terrible hawks in this country.

In winter time this country doth abound with wild geese, wild ducks, and other sea fowl, that a great part of winter the planters have eaten nothing but roastmeat of divers fowls which they have killed.
Posted by Barbara Wells Sarudy at 4:00 AM