1629 The Countryside in New England

A Short and True Description of New England
by the Rev. Francis Higginson, written in 1629
Printed for Michael Sparke, London, 1630.

First therefore of the earth of New England and all the appurtenances thereof. It is a land of divers and sundry sorts all about Massachusetts Bay, and at Charles River is as fat black earth as can be seen anywhere; and in other places you have a clay soil; in others sandy, as it is all about our plantation at Salem, for so our town is now named (Psalms 76:2). 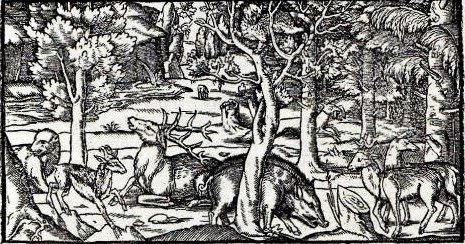 The form of the earth here in the superficies of it is neither too flat in the plains nor too high in hills, but partakes of both in mediocrity, and fit for pasture, or for plow or meadow ground, as men please to employ it. For all the country be as it were a thick wood in general, yet in divers places there is much ground cleared by the Indians, as especially about the plantation. I am told that about three miles from us a man may stand on a little hilly place and see divers thousands of acres of ground as good as need to be, and not a tree in the same.

For stone there is plenty of slates at the Isle of Slate in the bay of Massachusetts, and limestone, free-stone and smooth-stone and iron-stone and marble stone also in such a store, that we have great rocks of it, and a harbor hard by. Our plantation is from thence called Marble Harbor.

Of minerals there hath yet been but little trial made, yet we are not without great hope of being furnished in that soil.

The fertility of the soil is to be admired at, as appeareth in the abundance of grass that groweth everywhere, both very thick, very long, and very high in divers places. But it groweth very wildly with a great stalk and a broad and ranker blade, because it never had been eaten by cattle, nor mowed with a scythe, and seldom trampled on by foot. It is scarce to be believed how our kine and goats, horses and hogs do thrive and prosper here and like well of this country.
Posted by Barbara Wells Sarudy at 4:00 AM