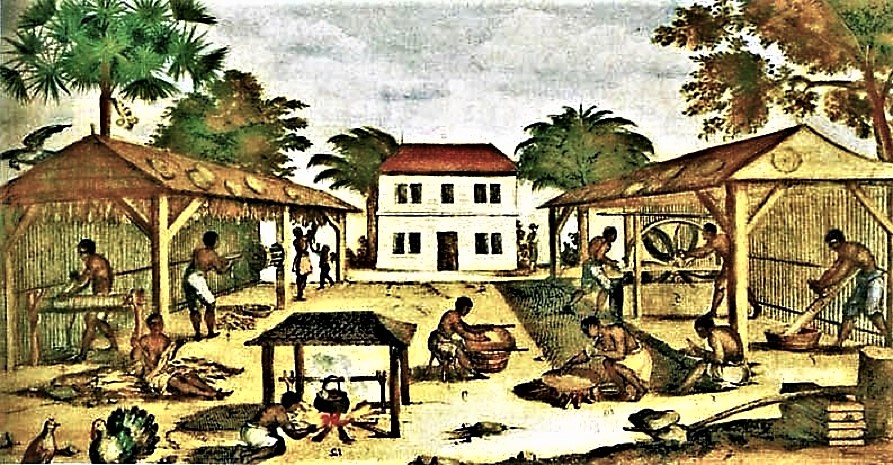 In contrast to New England and the middle colonies, the Southern colonies were predominantly rural settlements.  By the late 17th century, Virginia's and Maryland's economic and social structure rested on the great planters and the yeoman farmers. The planters of the Tidewater region, supported by slave labor, held most of the political power and the best land. They built great houses, adopted an aristocratic way of life, and kept in touch as best they could with the world of culture overseas.

The yeoman farmers, who worked smaller tracts, sat in popular assemblies and found their way into political office. Their outspoken independence was a constant warning to the oligarchy of planters not to encroach too far upon the rights of free men.

The settlers of the Carolinas quickly learned to combine agriculture and commerce, and the marketplace became a major source of prosperity. Dense forests brought revenue: Lumber, tar, and resin from the longleaf pine provided some of the best shipbuilding materials in the world. Not bound to a single crop as was Virginia, North and South Carolina also produced and exported rice and indigo, a blue dye obtained from native plants that was used in coloring fabric.

In the southernmost colonies, as everywhere else, population growth in the backcountry had special significance. German immigrants and Scots-Irish, unwilling to live in the original Tidewater settlements where English influence was strong, pushed inland. Those who could not secure fertile land along the coast, or who had exhausted the lands they held, found the hills farther west a bountiful refuge. Although their hardships were enormous, restless settlers kept coming.

From Outline of U.S. History, a publication of the U.S. Department of State copied from the website of the United States Information Agency, where it was published in November 2005.
Posted by Barbara Wells Sarudy at 4:00 AM