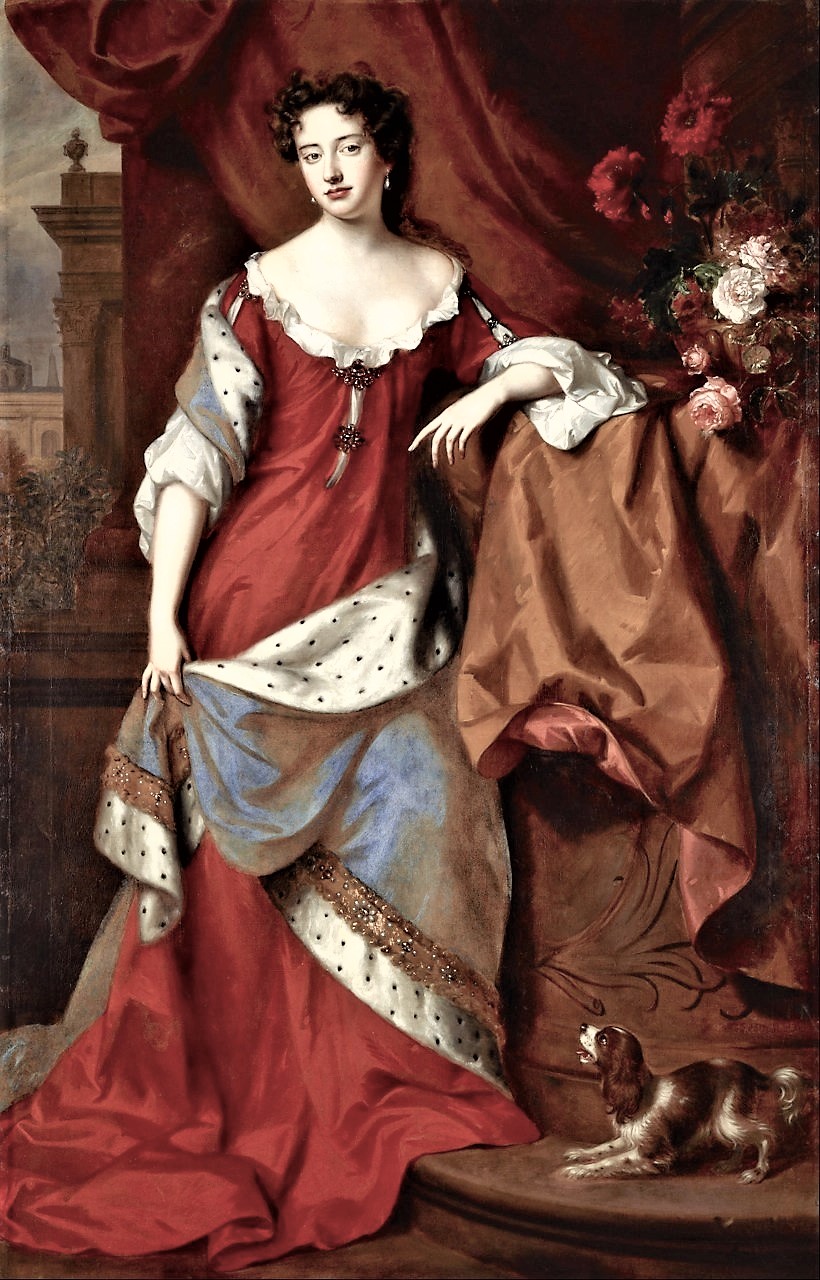 "Anne Stuart was an unlikely person to become queen of England. She was born on February 6, 1665 to the Duke and Duchess of York and was their 2nd daughter out of 3 children. Shortly before her birth, her uncle, King Charles II, had married and seemed destined to have a large family after fathering several illegitimate children. But he had no more children. As Anne grew older she would be plagued by numerous health problems, but she survived to adulthood. She only received a limited education, yet Anne would reign during a critically important period in her nation's history. During her reign she would oversee 2 major events in English history, one domestic and one foreign. The first being the Act of Union that united England and Scotland. The second was a major international war, the War of Spanish Succession. Best remembered as the last conflict of the Stuart dynasty Anne had no heirs. The events of her reign would pave the way for Britain to become an international world power.

"Although born into royalty, her education was similar to that of other aristocratic girls: languages and music. Her knowledge of history was limited, and she received no instruction in civil law or military matters that male monarchs were expected to have. She was also a sickly child, and may have suffered from the blood disease porphyria, as well as having poor vision and a serious case of smallpox at the age 12. Poor health would plague Anne her entire life, probably contributing to her many miscarriages.

"Anne grew up in an atmosphere of controversy. Her father James, the Duke of York, and both her mother and later her stepmother were Roman Catholic. They would have preferred to raise Anne and Mary (their only children to survive early childhood) as Roman Catholics. Nevertheless, prominent Protestants, such as Henry Compton, later bishop of London, interceded and ensured the girls would not only be required to attend Protestant services, but that they also receive Protestant religious instruction.

"Anne's life dramatically changed when the Lord Treasurer and Earl of Danby, in an attempt to strengthen his influence with King Charles II, arranged the marriage of Anne's sister, Mary, to William of Orange. Their father, the Duke of York, had wanted to wed Mary to the heir to the French throne, a Roman Catholic. Danby persuaded by the King to allow the marriage to William, a Dutch Protestant and an enemy of France, thus straining the close relationship between Anne and Mary. Anne married Prince George of Denmark. This was an arrangement Anne's father negotiated in secret with sponsorship by King Louis XIV of France, who hoped for a Anglo-Danish alliance against William of Orange and the Dutch. No such alliance would ever materialize.

"Her husband did not affect Anne's position, as he remained politically weak and inactive, suffering from a drinking problem. Prince George's influence in matters of state would remain small throughout their marriage. The relationship he had with Anne was a close one, and she loved him deeply, however, their marriage was saddened by Anne's 12 miscarriages and the fact that none of their other 5 children reached adulthood.

"When King Charles II died in 1686, Anne's father became King James II. His Roman Catholicism and his desire to rule without Parliament's input caused Parliament to call on William of Orange and Mary to take the throne, in the Glorious Revolution of 1688. This revolution created a constitutional, limited monarchy in England, where elected representatives, not a dynastic monarch, truly ruled. Interestingly, later Queen Anne became the last British monarch to veto an act of Parliament. Anne supported the revolution and opposed her father.

"Mary allowed her husband to rule, and neither got along with Anne during their reign. But since they never had children, after Mary died, followed by William, in 1702, the throne then passed to Anne. The Settlement Act of 1701 paved the way for Anne's reign. It stated that if Anne died without children the throne would pass to the German Hanoverians. The only challenge was her half brother James, a Roman Catholic living in exile in France. Thus Anne ascended as the last Stuart monarch, and was the first married queen to rule England.

"Anne's reign would be characterized by the attempts of others to manipulate her. Most significantly among these individuals was Sarah Churchill. A friend of Anne's since childhood, Anne leaned heavily on her for companionship. After Anne's marriage she named Sarah to the prestigious position of Lady of the Bedchamber. After Anne became queen, she named Sarah to other prominent posts including Keeper of the Privy Purse, Mistress of the Robes, and Groom of the Stole. Their relationship for many years was a close one with Anne showering Sarah with large allowances and gifts, such as the huge and extravagant Blenheim estate. The estate was given to the Churchill's as a reward for John Churchill's important military victory in the War of Spanish Succession. Anne often seemed dependent on Sarah, at least for emotional support. Anne would constantly write to Sarah, when Sarah was away from the court attending to her family. Anne's letters made it seem like she could not get along without Sarah. They would use playful pseudonyms when writing to each other: Anne being Mrs. Morley and Sarah Mrs. Freeman. Their relationship would eventually deteriorate due to Sarah's nagging and their many petty arguments. Sarah would fall out of favor and would be replaced as Anne's favorite by a distant cousin, Abigail Masham.

"The end of Anne's friendship with Sarah signaled a change in political influences as well. Although Anne had always been a strong Tory, throughout her reign she had vigorously supported the War of Spanish Succession, a Whig war. Sarah Churchill was a Whig; and her husband John, though a Tory, was the leading English general in the conflict. Because of the Churchill's influence, Anne had always been inclined to support the war which was the most important event in foreign affairs during Anne's reign. However, when Abigail Masham a Tory replaced Sarah as Anne's close friend, it signaled a shift in politics. Some historians believe Anne manipulated her ministers to enact the policies she wanted, while others see her as a monarch manipulated by her ministers. Whatever the case, when the Tories came into power they negotiated an end to the war.

"The Settlement Act of 1701 had angered Scotland where the Stuart dynasty had originated. The Scots threatened to bring back James, Anne's Roman Catholic half-brother and pretender to the throne, to rule. To head off a revolt and unite support for the crown, Anne pushed for the Act of Union which would unite England and Scotland. The Act of Union was finally accepted in 1707.

"In the last couple years of her life Anne became very ill. She was often bedridden and attended to by doctors. These doctors used many techniques to try to cure Anne including bleeding her and applying hot irons. These crude medicinal techniques probably did more harm than good, and Anne died on July 31st 1714."

From King's College website of Brian A. Pavlac on Women's History..
Posted by Barbara Wells Sarudy at 4:00 AM