This famous Restoration Satirical petition was put forth in 1674, as a protest against the perceived ills of the all-male coffee house culture of England. 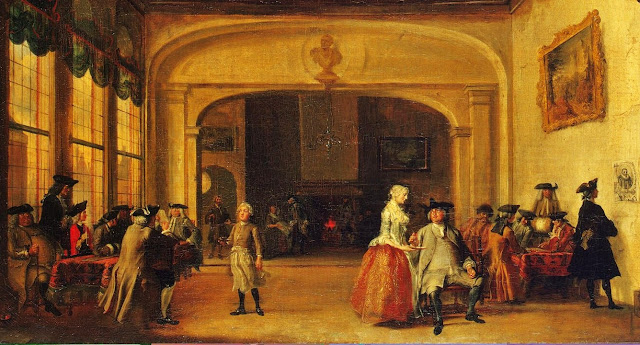 1674 Petition against all male coffee houses

Representing to Publick Consideration the Grand Inconveniencies accruing to their Sex from the Excessive Use of that drying, Enfeebling Liquor...By a Well-willer, London, Printed 1674.

To the Right Honorable the Keepers of the Liberties of Venus; The Worshipful Court of Female Assistants, &c.

The Humble Petitions and Address of Several Thousands of Buxome Good-Women, Languishing in Extremity of Want.

Sheweth, That since 'tis Reckon'd amongst the Glories of our Native Country, To be a Paradise for Women: The fame in our Apprehensions can consist in nothing more than the brisk Activity of our men, who in former Ages were justly esteemed the Ablest Performers in Christendome; But to our unspeakable Grief, we find of late a very sensible Decay of that true Old English Vigor; our Gallants being every way so Frenchified, that they are become meer Cock-sparrows, fluttering things that come on Sa sa, with a world of Fury, but are not able to stand to it, and in the very first Charge fall down flat before us.

Never did Men wear greater breeches, or carry less in them of any Mettle whatsoever. There was a glorious Dispensation ('twas surely in the Golden Age) when Lusty Ladds of Seven or eigh hundred years old, Got Sons and Daughters; ande we have read, how a Prince of Spain was forced to make a Law, that Men should not Repeat the Grand Kindness to their Wives, above NINE times a night; but Alas! Alas! Those forwards Days are gone, The dull Lubbers want a Spur now, rather than a Bridle: being so far from dowing any works of Supererregation that we find them not capable of performing those Devoirs which their Duty, and our Expectations Exact.

The Occasion of which Insufferable Disaster, after a furious Enquiry, and Discussion of the Point by the Learned of the Faculty, we can Attribute to nothing more than the Excessive use of that Newfangled, Abominable, Heathenish Liquor called COFFEE, which Riffling Nature of her Choicest Treasures, and Drying up the Radical Moisture, has so Eunucht our Husbands, and Cripple our more kind Gallants, that they are become as Impotent as Age, and as unfruitful as those Desarts whence that unhappy Berry is said to be brought.

For the continual flipping of this pitiful drink is enough to bewitch Men of two and twenty, and tie up the Codpiece-points without a Charm. It renders them that us it as Lean as Famine, as Rivvel'd as Envy, or an old meager Hagg over-ridden by an Incubus. They come from it with nothing moist but their snotty Noses, nothing stiffe but their Joints, nor standing but their Ears: They pretend 'twill keep them Waking, but we find by scurvy Experience, they sleep quietly enough after it. A Betrothed Queen might trust her self a bed with one of them, without the nice Caution of a sword between them: nor can call all the Art we use revive them from this Lethargy, so unfit they are for Action, that like young Train-band-men when called upon Duty, their Ammunition is wanting; peradventure they Present, but cannot give Fire, or at least do but flash in the Pan, instead of doing executions.

Nor let any Doating, Superstitious Catos shake their Goatish Beards, and task us of Immodesty for this Declaration, since 'tis a publick Grievance, and cries aloud for Reformation. Weight and Measure, 'tis well known, should go throughout the world, and there is no torment like Famishment. Experience witnesses our Damage, and Necessity (which easily supersedes all the Laws of Decency) justifies our complaints: For can any Woman of Sense or Spirit endure with Patience, that when priviledg'd by Legal Ceremonies, she approaches the Nuptial Bed, expecting a Man that with Sprightly Embraces, should Answer the Vigour of her Flames, she on the contrary should only meat A Bedful of Bones, and hug a meager useless Corpse rendred as sapless as a Kixe, and dryer than a Pumice-Stone, by the perpetual Fumes of Tobacco, and bewitching effects of this most pernitious COFFEE, where by Nature is Enfeebled, the Off-spring of our Mighty Ancestors Dwindled into a Succession of Apes and Pigmies: and ---The Age of Man Now Cramp't into an Inch, that was a Span.

Nor is this (though more than enough!) All the ground of our Complaint: For besides, we have reason to apprehend and grow Jealous, That Men by frequenting these Stygian Tap-houses will usurp on our Prerogative of tattling, and soon learn to exceed us in Talkativeness: a Quality wherein our Sex has ever Claimed preheminence: For here like so many Frogs in a puddle, they sup muddy water, and murmur insignificant notes till half a dozen of them out-babble an equal number of us at a Gossipping, talking all at once in Confusion, and running f rom point to point as insensibly, and swiftly, as ever the Ingenous Pole-wheel could run divisions on the Base-viol; yet in all their prattle every one abounds in his own sense, as stiffly as a Quaker at the late Barbican Dispute, and submits to the Reasons of no othre mortal: so that there being neither Moderator nor Rules observ'd, you mas as soon fill a Quart pot with Syllogismes, as profit by their Discourses.

Certainly our Countrymens pallates are become as Fantastical as their Brains; how ellse is't possible they should Apostatize from the good old primitve way of Ale-drinking, to run a whoring after such variety of distructive Foreign Liquors, to trifle away their time, scald their Chops, and spend their Money, all for a little base, black, thick, nasty, bitter, stinking, nauseous Puddle-water: Yet (as all Witches have their Charms) so this ugly Turskish Enchantress by certain Invisible VVyres attracts both Rich and Poor; so that those that have scarece Twopence to buy their Children Bread, must spend a penny each evening in this Insipid Stuff: Nor can we send one of our Husbands to Call a Midwife, or borrow a Glister-pipe, but he must stay an hour by the way drinking his two Dishes, & two Pipes.

At these Houses (as at the Springs in Afric) meet all sorts of Animals, whence follows the production of a thousand Monster Opinions and Absurdities; yet for being dangerous to Government, we dare to be their Compurgators, as well knowing them to be too tame and too talkative to make any desperate Politicians: For though they may now and then destroy a Fleet, or kill ten thousand of the French, more than all the Confederates can do, yet this is still in their politick Capacities, for by their personal valour they are scarce fit to be of the Life-guard to a Cherry-tree: and therefore, though they frequently have hot Contests about most Important Subjects; as what colour the Red Sea is of; whether the Great Turk be a Lutheran or a Calvinist; who Cain's Father in Law was, &c., yet they never fight about them with any other save our Weapon, the Tongue.

Some of our Sots pretend tippling of this boiled Soot cures them of being Drunk; but we have reason rather to conclude it makes them so, because we find them not able to stand after it: 'Tis at best but a kind of Earthing a Fox to hunt him more eagerly afterward: A rare method of good-husbandry, to enable a man to be drunk three times a day! Just such a Remedy for Drunkenness, as the Popes allowing of Stews, is a means to prevent Fornication:

The Coffee-house being in truth, only a Pimp to the Tavern, a relishing fop prearative to a fresh debauch: For when people have swill'd themselves with a morning draught of more Ale than a Brewer's horse can carry, hither they come for a pennyworth of Settle-brain, where they are sure to meet enow lazy pragmatical Companions, that resort here to prattle of News, that they neither understand, nor are concerned in; and after an hours impertinent Chat, begin to consider a Bottle of Claret would do excellent well before Dinner; whereupon to the Bush they all march together, till every one of them is as Drunk as a Drum, and then back again to the Coffee-house to drink themselves sober; where three or four dishes a piece, and smoaking, makes their throats as dry as Mount Aetna enflam'd with Brimflame; for that they must away to the next Red Lattice to quenc them with a dozen or two of Ale, which at last growing nauseous, one of them begins to extol the blood of the Grape, what rare Langoon, and Racy Canary may be had at the Miter:

Saist thou so? cries another, Let's then go and replenish there, with our Earthen Vessels: So once more they troop to the Sack-shop till they are drunker than before; and then by a retrograde motion, stagger back to Soberize themselves with Coffee: thus like Tennis Balls between two Rackets, the Fopps our Husbands are bandied to and fro all day between the Coffee-house and Tavern, whilst we poor souls sit mopeing all alone till Twelve at night, and when at last they come to bed finoakt like a Westphalia Hogs-head we have no more comfort of them, than from a shotten Herring or a dried Bulrush; which forces us to take up this Lamentation and sing,

Wherefore the Premises considered, and to the end that our Just Rights may be restored, and all the Ancient Priviledges of our Sex preserved inviolable; That our Husbands may give us some other Testimonial of their being Men, besides their Beards and wearing of empty Pantaloons: That they no more run the hazard of being Cuckol'd by Dildo's: But returning to the good old strengthening Liquors of our Forefathers; that Natures Exchequer may once again be replenisht, and a Race of Lusty Here's begot, able by their Atchievements, to equal the Glories of our Ancesters.

We Humbly Pray, That you our Trusty Patrons would improve your Interest, that henceforth the Drinking COFFEE may on severe penalties be forbidden to all Persons under the Age of Threescore; and that instead thereof, Lusty nappy Beer, Cock-Ale, Cordial Canaries, Restoring Malago's, and Back-recruiting Chochole be Recommended to General Use, throughout the Utopian Territories.

In hopes of which Glorious Reformation, your Petitioners shall readily Prostrate themselves, and ever Pray, &c. FINIS.
Posted by Barbara Wells Sarudy at 4:00 AM