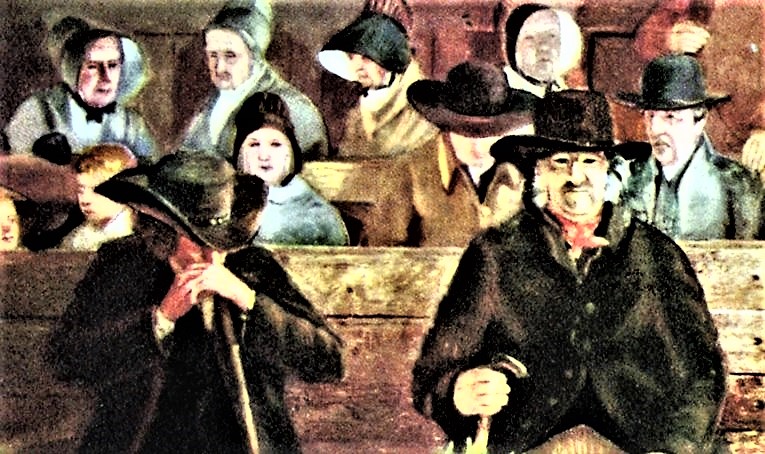 The Society of Friends, or Quakers, began at the tail end of Europe’s Protestant Reformation in the 17th century. The missionary efforts of the earliest Friends took them to North America, where they became heavily involved in Pennsylvania politics before reversing their views on government participation in the mid-1750s. The Society became the first organization in history to ban slaveholding, and in the 1800s Quakers populated the abolitionist movement in numbers far exceeding their proportion of all Americans.

Because the Protestant reformers of the 16C attempted to eliminate intermediaries between God and people, the Society of Friends, or Quakers, may be regarded as the fullest expression of the Reformation. Most reformers rejected some sacraments and priestly offices of the Roman Catholic church, but the Quakers omitted them all, including baptism, the Lord’s Supper, and any ordained, paid clergy. Quakers instead relied upon the direction of what they called “Christ within” or the Inner Light. Their worship consisted of waiting in silence until the Inner Light led members to share their religious concerns with the brethren.

To most Protestants, this primary reliance on inward inspiration depreciated the authority of the Bible, the centrality of the historical Jesus and the Atonement, and hierarchy within church, state, and family. The earliest Quakers (in England, 1651-1660) seemed to confirm the worst suspicions of their critics by proselytizing with abandon and adding thousands to their numbers. Then and later, they were persecuted as “ranters” or anarchists. Even within the Society of Friends the significance of the Atonement and the Bible remained an unsettling question, causing schisms, especially in the nineteenth century. But Quakers enjoyed a complementary freedom from biblicism that permitted the Society uniquely to innovate and change radically over the centuries. Quaker abolitionism was one such innovation.

The missionary efforts of the earliest Friends, including founder George Fox, took them to North America where, as in England, they were persecuted. Massachusetts Bay Colony executed four. Quaker colonization of America, however, offered the prospect of a refuge and more. In contrast to other radical offspring of the Reformation, such as the Amish, Quakers believed that government was divinely instituted and virtuous men and women must help make it operate as God intended. No Quaker did more to enlist his brethren into public service than William Penn. In Pennsylvania, a responsive government of virtuous men would encourage peace, justice, charity, spiritual equality, and liberty for the benefit not just of Quakers but also of Native Americans and non-English refugees from Europe. It was to be a “Holy Experiment” and, in its way, as much a “City on a Hill” as New England.

Although the reality fell short of Penn’s utopian hopes, it still succeeded mightily in the opinion of immigrants and posterity. Ambition, envy, and avarice produced thirty years of tumultuous politics in the new province and left Penn convinced that his experiment had failed. But at the same time, Pennsylvania gained a reputation as the “best poor man’s country,” free of feudal elites, established churches, tithes, discriminatory oaths, high taxes, compulsory military service, and war. While Pennsylvania prospered, Quakers prospered more than others. They always composed the majority of the elite merchants of colonial Philadelphia as well as the most prosperous farmers of the eastern counties.

Although at odds with each other politically, Quakers nevertheless dominated the government of Pennsylvania. By 1740 Quaker politicians had become sufficiently anxious about their ever-declining proportion of the population and their more aggressive political enemies that they closed ranks and formed possibly the most formidable Whig political organization in colonial America, the Quaker party.

Ironically, political hegemony and social and economic preeminence raised dissenting voices among Friends, and in the 1750s they determined to reverse the direction the Society had taken since 1682. They believed that Quaker participation in government had brought with it intolerable compromises in such Quaker beliefs as pacifism and that many Friends, especially wealthy ones, had assimilated “worldly” secular behavior. After another generation there would be nothing left of Quakerism but the name, lamented one dissenter. To restore the integrity of the Society, reformers insisted on strict enforcement of all its mores, especially endogamy, and in the violence brought to Pennsylvania by the French and Indian War, they demanded that Quakers resign from public office rather than become bellicose. On the social front they moved quickly against deviancy, expelling more than one in five Friends by 1775, but not until the more intense public crisis of the Revolution did all Friends leave public office and the Holy Experiment completely end.

This sectarian revival in the Society brought with it an outburst of philanthropy and testimonies that have become synonymous with Quakerism. From 1755 to 1776, the Society became the first organization in history to ban slaveholding, and Quakers created abolition societies to promote emancipation. In the next century, Quakers populated the abolitionist movement in numbers far exceeding their proportion of all Americans. Some labored for such gradual solutions as the colonization of freedmen, while more conspicuous Quaker abolitionists espoused immediate emancipation. The latter were critically important to organizations like the American Anti-Slavery Society, the Philadelphia Anti-Slavery Society, and the Female Antislavery Society, and to active resistance such as the “underground railway” in Pennsylvania and the Midwest. Following the example of eighteenth-century abolitionist Anthony Benezet, Friends showed an interest in the education and social progress of blacks. During Reconstruction, American and English Quakers raised hundreds of thousands of dollars for freedmen’s relief and established scores of schools for freedmen.

Penn’s legendary friendship with Native Americans partly underlay Quakers’ renewed pacifism during the French and Indian War and their concurrent departure from government. Thereafter they continued to pursue justice and charity for Native Americans and in the post-Civil War era lobbied and cooperated with the federal government in the administration of Indian affairs in the trans-Mississippi West.

Women Friends shared in all these testimonies and philanthropies. Since the 1650s when Margaret Fell invaluably aided George Fox, whom she later married, women’s role and status in the Society of Friends more closely approached equality with men’s than in any other Christian church. Preaching and ministering to mixed audiences, traveling extensively unaccompanied by men, regulating the lives of fellow Quaker women without men’s assistance (such as in church discipline and marriage arrangements), Quaker women knew a sphere of activity and attained a range of skills that surpassed those of their non-Quaker cohorts. Not surprisingly, historian Mary Maples Dunn found that in nineteenth-century America Quaker women comprised 40 percent of female abolitionists, 19 percent of feminists born before 1830, and 15 percent of suffragists born before 1830.

Although Quakers never returned to public office in any great number after 1776, they never retreated from politics. They believed that out of office, immune to the verdict of the ballot box, they could serve as democracy’s conscience better than ever before.

Although a more regimented Society emerged from the 18C reformation, the Society almost never disciplined a Friend over theology. That tolerance ended in the nineteenth century, however. In 1827 the venerable Philadelphia Yearly Meeting of Friends split into an evangelical group (called the “orthodox”) and a liberal group (called “Hicksite”). In succeeding years, divisions increased, spreading to other areas and yearly meetings of America and also subdividing already fractured meetings. Anxiety over Unitarian theology, languishing membership, industrialization, and the disciplinary powers of meetings, among other things, contributed to the splits. Quaker energies and voices, which had been better focused since the 1750s, became dissipated in intramural recriminations. Quakers continued to practice antislavery, pacifism, and their traditional philanthropies, but not as one body.
Posted by Barbara Wells Sarudy at 4:00 AM