A Short and True Description of New England
by the Rev. Francis Higginson, written in 1629
Printed for Michael Sparke, London, 1630.

In our plantation we have already a quart of milk for a penny, but the abundant increase of corn proves this country to be a wonderment. Thirty, forty, fifty, sixty are ordinary here. Yea, Joseph’s increase in Egypt is here outstripped with us. Our planters hope to have more than a hundred fold this year, and all this while I am within compass — what will you say of two-hundred fold and upward? It is almost incredible what great gain some of our English planters have had by our Indian corn. Credible persons have assured me, and the party of it himself announced the truth of it to me, that from the setting of 13 gallons of corn, he hath had an increase of 52 hogsheads, every hogshead holding seven bushels of London measure, and every bushel was by him sold and trusted to the Indians for so much beaver as was worth 18 shillings, and so of this 13 gallons of corn which was worth 6 shillings 8 pence, he made about £ 327 of it the year following, as by reckoning it will appear; wherefore you may see how God blesseth industry in this land. There are not such beautiful and great ears of corn I suppose anywhere else but in this country, being also of variety of colors as red, blue and yellow, etc. And of one corn there springeth four or five hundred. I have sent you many ears of divers colors that you may see the truth of it. Little children here by planting of corn may earn much more than their own maintenance. 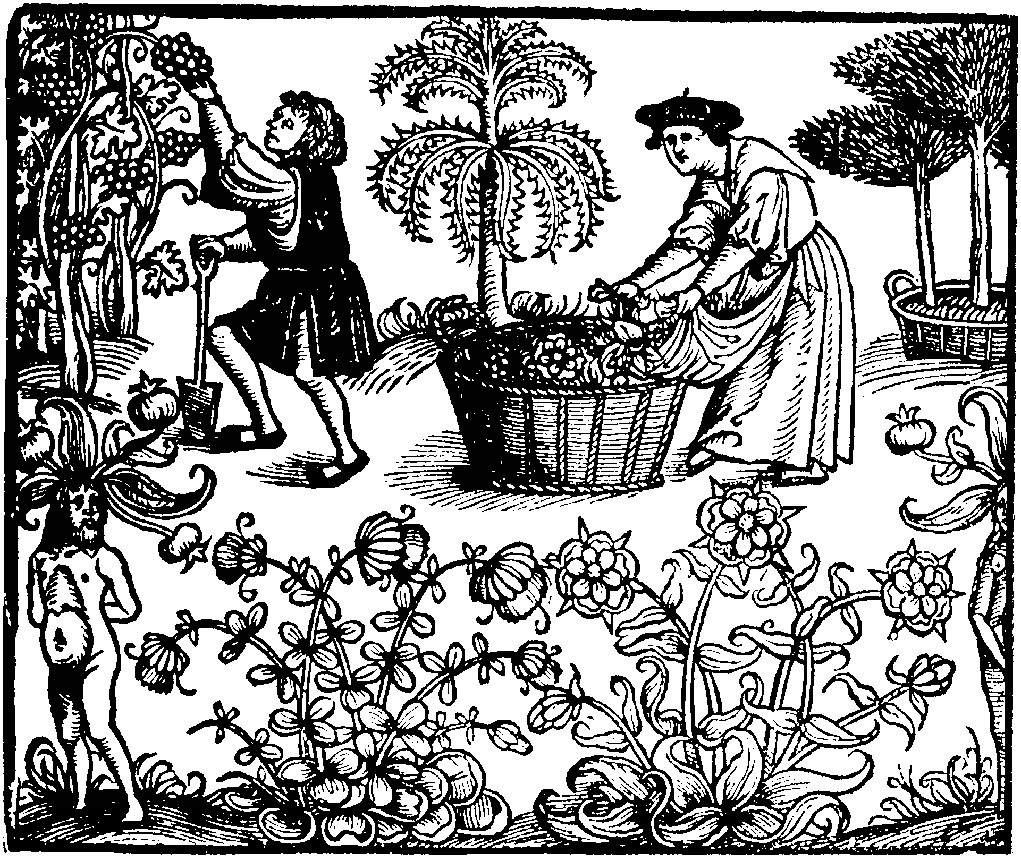 They have tried our English corn at new Plymouth plantation, so that all our several grains grow here very well, and have a fitting soil for their nature.

Our governor hath store of green peas growing in his garden as good as ever I ate in England. This country aboundeth naturally with store of roots of great variety and good to eat. Our turnips, parsnips and carrots are here bigger and sweeter than is ordinarily found in England. Here are also store of pumpkins, cucumbers, and other things of that nature which I know not. Also, divers excellent pot-herbs grow abundantly among the grass, as strawberry leaves in all parts of the country and plenty of strawberries in their time, and pennyroyal, wintersavory, sorrel, brooklime, liverwort, carvel and watercresses, also leeks and onions are ordinary, and divers medicinal herbs. Here are also abundance of other sweet herbs delightful to the smell, whose names we know not, etc., and plenty of single damask roses very sweet and two kinds of herbs that bear two kinds of flowers very sweet, which they say, are as good to make cordage or cloth as any hemp or flax we have.

Excellent vines are here up and down in the woods. Our governor hath already planted a vineyard with great hope of increase. Also, mulberries, plums, raspberries, corrance, chestnuts, filberts, walnuts, smalnuts, hurtleberries and haws of whitethorn near as good as our cherries in England, they grow in plenty here...

For beasts there are some bears, and they say some lions also; for they have been seen at Cape Anne. Also here are several sorts of deer, some whereof bring three or four young ones at once, which is not ordinary in England. Also wolves, foxes, beavers, otters, martins, great wild cats, and a great beast called a molke (moose) as big as an ox. I have seen the skins of all these beasts since I came to this plantation excepting lions. Also here are great store of squirrels, some greater, and some smaller and lesser. There are some of the lesser sort, they tell me, that by a certain skin will fly from tree to tree though they stand far distant...

Of the waters of New England with the things belonging to the same. New England hath water enough both salt and fresh, the greatest sea in the world, the Atlantic sea, runs all along the coast thereof. There are abundance of islands along the shore, some full of wood and mast to feed swine; and others clear of wood, and fruitful to bear corn. Also we have store of excellent harbors for ships, as at Cape Anne, and at Massachusetts Bay, and at Salem, and at many other places; and they are the better because for strangers there is a very difficult and dangerous passage into them, but unto such as are well acquainted with them, they are easy and safe enough. The abundance of sea-fish is almost beyond believing, and sure I should scarce have believed it except I had seen it with mine own eyes. I saw great store of whales, and crampus, and such abundance of mackerels that it would astonish one to behold, likewise codfish abundant on the coast, and in their season are plentifully taken. There is a fish called a bass, a most sweet and wholesome fish as ever I did eat. It is altogether as good as our fresh salmon, and the season of their coming was begun when we came first to New England in June, and so continued about three months space. Of this fish our fishermen take many hundreds together, which I have seen lying on the shore to my admiration. Yea, their nets ordinarily take more then they are able to haul to land, and for want of boats and men they are constrained to let many go after they have taken them, and yet sometimes they fill two boats at a time with them. And besides bass we take plenty of skate and thomback, and abundance of lobsters, that the least boy in the plantation may both catch and eat what he will of them. For my own part I was soon cloyed with them, they were so great, and fat, and luscious. I have seen some myself that have weighed 16 pounds, but others have had divers times so great lobsters as have weighed 25 pounds, as they assured me. Also here is abundance of herring, turbot, sturgeon, cusks, haddocks, mullets, eels, crabs, mussels and oysters...
Posted by Barbara Wells Sarudy at 4:00 AM