The Maryland Toleration Act did not bring complete religious freedom. Nor did it come about because of a profound humanistic conviction on the part of Cecil (Cecilius) Calvert, Second Lord Baltimore (1605-1675) the Maryland proprietor, who remained in England instead of sailing to Maryland to live. 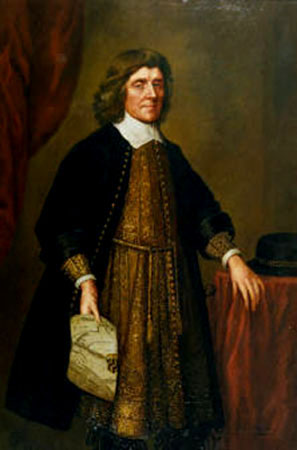 The act was a pragmatic solution to a serious problem. The Catholics in originally Catholic Maryland had become a minority of the population although still powerful politically. They were in great danger of being ill-treated by the Protestant majority.

The Toleration Act, it was believed, was a way of providing protection for Catholics while at the same time representing a nod in the direction of the English government, which in 1649, and for a dozen years thereafter was firmly under the control of the English Puritans.

Nonetheless, the document is important because it did provide modest although impermanent protection for Catholic Marylanders and set a precedent to which others could refer.

Despite Baltimore's Catholic background and his desire to use Maryland as a refuge for Catholics persecuted elsewhere, the Catholic Church never became the established church. In the eighteenth century this distinction was given to the Church of England.

Forasmuch as in a well governed and Christian Common Weath matters concerning Religion and the honor of God ought in the first place to bee taken, into serious consideracion and endeavoured to bee settled, Be it therefore ordered and enacted by the Right Honourable Cecilius Lord Baron of Baltemore absolute Lord and Proprietary of this Province with the advise and consent of this Generall Assembly:

That whatsoever person or persons within this Province and the Islands thereunto helonging shall from henceforth blaspheme God, that is Curse him, or deny our Saviour Jesus Christ to bee the sonne of God, or shall deny the holy Trinity the father sonne and holy Ghost, or the Godhead of any of the said Three persons of the Trinity or the Unity of the Godhead, or shall use or utter any reproachfull Speeches, words or language concerning the said Holy Trinity, or any of the said three persons thereof, shalbe punished with death and confiscation or forfeiture of all his or her lands and goods to the Lord Proprietary and his heires.

And bee it also Enacted by the Authority and with the advise and assent aforesaid, That whatsoever person or persons shall from henceforth use or utter any reproachfull words or Speeches concerning the blessed Virgin Mary the Mother of our Saviour or the holy Apostles or Evangelists or any of them shall in such case for the first offence forfeit to the said Lord Proprietary and his heirs Lords and Proprietaries of this Province the summe of five pound Sterling or the value thereof to be Levyed on the goods and chattells of every such person soe offending, but in case such Offender or Offenders, shall not then have goods and chattells sufficient for the satisfyeing of such forfeiture, or that the same bee not otherwise speedily satisfyed that then such Offender or Offenders shalbe publiquely whipt and bee imprisoned during the pleasure of the Lord Proprietary or the Lieutenant or cheife Governor of this Province for the time being. And that every such Offender or Offenders for every second offence shall forfeit tenne pound sterling or the value thereof to bee levyed as aforesaid, or in case such offender or Offenders shall not then have goods and chattells within this Province sufficient for that purpose then to bee publiquely and severely whipt and imprisoned as before is expressed. And that every person or persons before mentioned offending herein the third time, shall for such third Offence forfeit all his lands and Goods and bee for ever banished and expelled out of this Province.

And be it also further Enacted by the same authority advise and assent that whatsoever person or persons shall from henceforth uppon any occasion of Offence or otherwise in a reproachful manner or Way declare call or denominate any person or persons whatsoever inhabiting, residing, traffiqueing, trading or comerceing within this Province or within any the Ports, Harbors, Creeks or Havens to the same belonging an heritick, Scismatick, Idolator, puritan, Independant, Prespiterian popish prest, Jesuite, Jesuited papist, Lutheran, Calvenist, Anabaptist, Brownist, Antinomian, Barrowist, Roundhead, Separatist, or any other name or terme in a reproachfull manner relating to matter of Religion shall for every such Offence forfeit and loose the somme of tenne shillings sterling or the value thereof to bee levyed on the goods and chattells of every such Offender and Offenders, the one half thereof to be forfeited and paid unto the person and persons of whom such reproachfull words are or shalbe spoken or uttered, and the other half thereof to the Lord Proprietary and his heires Lords and Proprietaries of this Province. But if such person or persons who shall at any time utter or speake any such reproachfull words or Language shall not have Goods or Chattells sufficient and overt within this Province to bee taken to satisfie the penalty aforesaid or that the same bee not otherwise speedily satisfyed, that then the person or persons soe offending shalbe publickly whipt, and shall suffer imprisonment without baile or maineprise [bail] untill hee, shee or they respectively shall satisfy the party soe offended or greived by such reproachfull Language by asking him or her respectively forgivenes publiquely for such his Offence before the Magistrate of cheife Officer or Officers of the Towne or place where such Offence shalbe given.

And be it further likewise Enacted by the Authority and consent aforesaid That every person and persons within this Province that shall at any time hereafter prophane the Sabbath or Lords day called Sunday by frequent swearing, drunkennes or by any uncivill or disorderly recreacion, or by working on that day when absolute necessity doth not require it shall for every such first offence forfeit 2s 6d sterling or the value thereof, and for the second offence 5s sterling or the value thereof, and for the third offence and soe for every time he shall offend in like manner afterwards 10s sterling or the value thereof. And in case such offender and offenders shall not have sufficient goods or chattells within this Province to satisfy any of the said Penalties respectively hereby imposed for prophaning the Sabbath or Lords day called Sunday as aforesaid, That in Every such case the partie soe offending shall for the first and second offence in that kinde be imprisoned till hee or shee shall publickly in open Court before the cheife Commander Judge or Magistrate, of that County Towne or precinct where such offence shalbe committed acknowledg the Scandall and offence he hath in that respect given against God and the good and civill Governement of this Province, And for the third offence and for every time after shall also bee publickly whipt.

And whereas the inforceing of the conscience in matters of Religion hath frequently fallen out to be of dangerous Consequence in those commonwealthes where it hath been practised, And for the more quiett and peaceable governement of this Province, and the better to preserve mutuall Love and amity amongst the Inhabitants thereof, Be it Therefore also by the Lord Proprietary with the advise and consent of this Assembly Ordeyned and enacted (except as in this present Act is before Declared and sett forth) that noe person or persons whatsoever within this Province, or the Islands, Ports, Harbors, Creekes, or havens thereunto belonging professing to beleive in Jesus Christ, shall from henceforth bee any waies troubled, Molested or discountenanced for or in respect of his or her religion nor in the free exercise thereof within this Province or the Islands thereunto belonging nor any way compelled to the beleife or exercise of any other Religion against his or her consent, soe as they be not unfaithfull to the Lord Proprietary, or molest or conspire against the civill Governement established or to bee established in this Province under him or his heires. And that all and every person and persons that shall presume Contrary to this Act and the true intent and meaning thereof directly or indirectly either in person or estate willfully to wrong disturbe trouble or molest any person whatsoever within this Province professing to beleive in Jesus Christ for or in respect of his or her religion or the free exercise thereof within this Province other than is provided for in this Act that such person or persons soe offending, shalbe compelled to pay trebble damages to the party soe wronged or molested, and for every such offence shall also forfeit 20s sterling in money or the value thereof, half thereof for the use of the Lord Proprietary, and his heires Lords and Proprietaries of this Province, and the other half for the use of the party soe wronged or molested as aforesaid, Or if the partie soe offending as aforesaid shall refuse or bee unable to recompense the party soe wronged, or to satisfy such fyne or forfeiture, then such Offender shalbe severely punished by publick whipping and imprisonment during the pleasure of the Lord Proprietary, or his Lieutenant or cheife Governor of this Province for the tyme being without baile or maineprise.

And bee it further alsoe Enacted by the authority and consent aforesaid That the Sheriff or other Officer or Officers from time to time to bee appointed and authorized for that purpose, of the County Towne or precinct where every particular offence in this present Act conteyned shall happen at any time to bee committed and whereupon there is hereby a forfeiture fyne or penalty imposed shall from time to time distraine and seise the goods and estate of every such person soe offending as aforesaid against this present Act or any part thereof, and sell the same or any part thereof for the full satisfaccion of such forfeiture, fine, or penalty as aforesaid, Restoring unto the partie soe offending the Remainder or overplus of the said goods or estate after such satisfaccion soe made as aforesaid. The freemen have assented.
Posted by Barbara Wells Sarudy at 4:00 AM