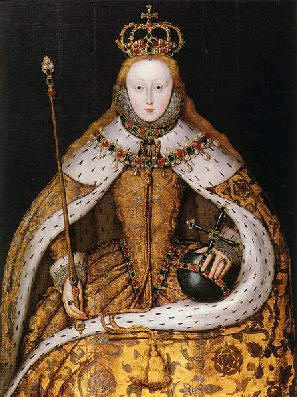 Elizabeth I began her rule as England's monarch in 1558. Never-married Queen Elizabeth avidly studied a variety of languages and cultures. She encouraged her nation to explore the world.

In 1587, Sir Walter Raleigh had sent an expedition to settle Roanoke Island in Pamlico Sound (between what today is mainland North Carolina and its Outer Banks) in hopes of bringing riches home to the crown and establishing a base from which to fight the Spanish. Colonists were left to establish themselves, while waiting for a ship from England to return to with needed provisions to keep the settlement functioning.

Worried about the coming of the Spanish Armada, the queen commandeered every able ship to remain in England to fight, leaving no seaworthy vessels to return to the “Roanoke” colony to resupply the colonists. When a ship finally arrived back on America's Atlantic coast with provisions 3 years later, all 121 colonists were gone, including the first English baby born in America, Virginia Dare. Elizabeth would not see a successful English colony in the new world during her lifetime.

Although Elizabeth believed that she had been called by God to rule, she was savvy enough to give some governing powers and religious freedoms to her restless subjects. And England emerged from her 50 year reign as a cultural and economic power. When Elizabeth died in 1603, only 4 years before the settlement of Jamestown in Virginia.

John Hawkins makes his first voyage to the West Indies.

John Hawkins makes his second voyage to the West Indies and Guinea.

1568 Hawkins fights Spanish at Battle of Vera Cruz, later set ashore at Tampico, Mexico, where three of his men began a 12 month march to the north, reaching Cape Breton.

Humphrey Gilbert sailed for America with 350 men but was forced to return.

1580 Sir Francis Drake returns to England from voyage around the world.

1583 Sir Humphrey Gilbert's voyage to Newfoundland; his ship was lost on the return voyage.

1586 In June, Sir Francis Drake arrives from Florida and removes the Lane colony to England.

1587 John White with 150 men, women, and children sent by Sir Walter Raleigh to plant the Cittie of Raleigh on the Chesapeake Bay, landed at Hatorask on July 22.

1602 Sir Walter Raleigh sent Samuel Mace of Weymouth on a voyage to Virginia (North Carolina) to gather plant materials and to search for survivors of the Lost Colony.

Capt. Bartholomew Gilbert sent on voyage to Chesapeake Bay; Gilbert and 4 others went ashore (likely the Eastern Shore) and were killed by Indians.