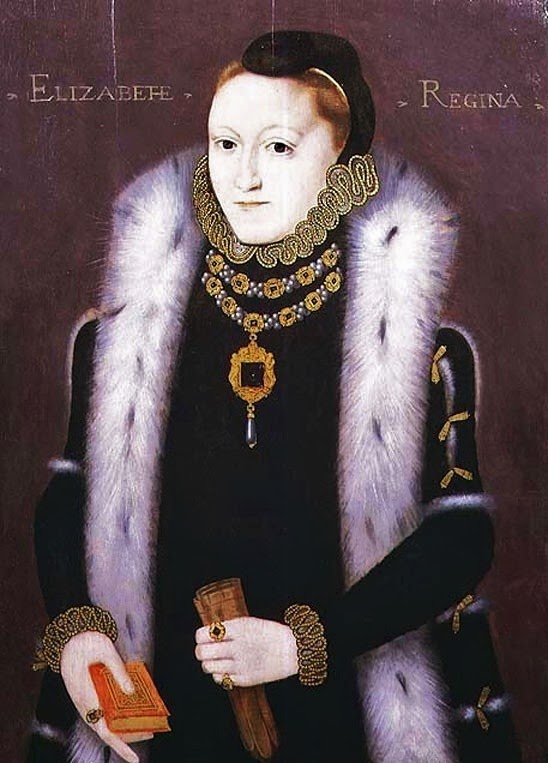 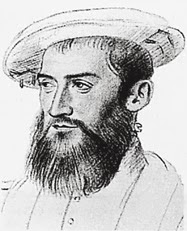 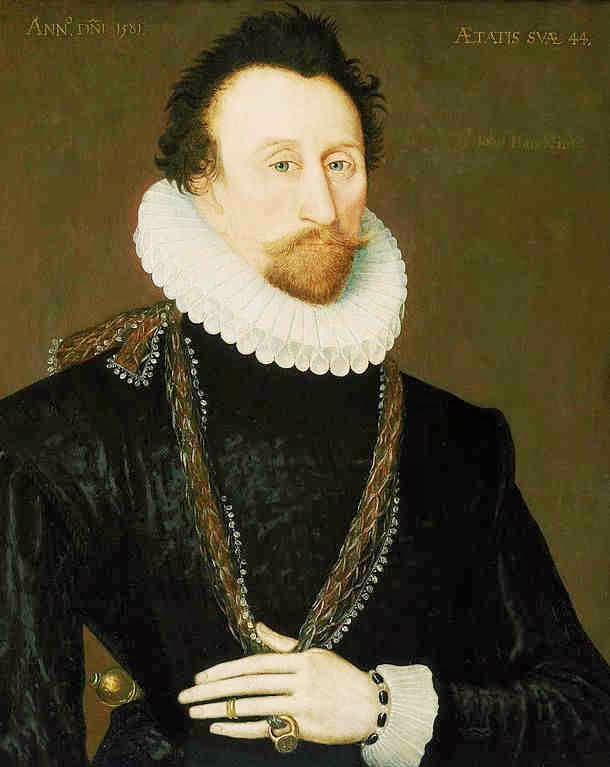 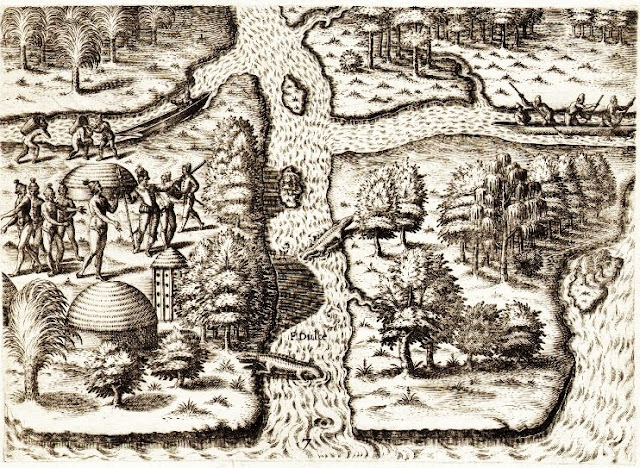 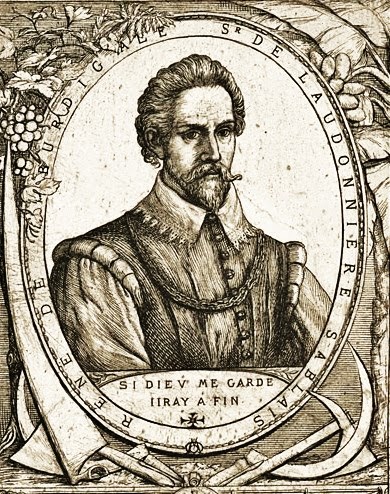 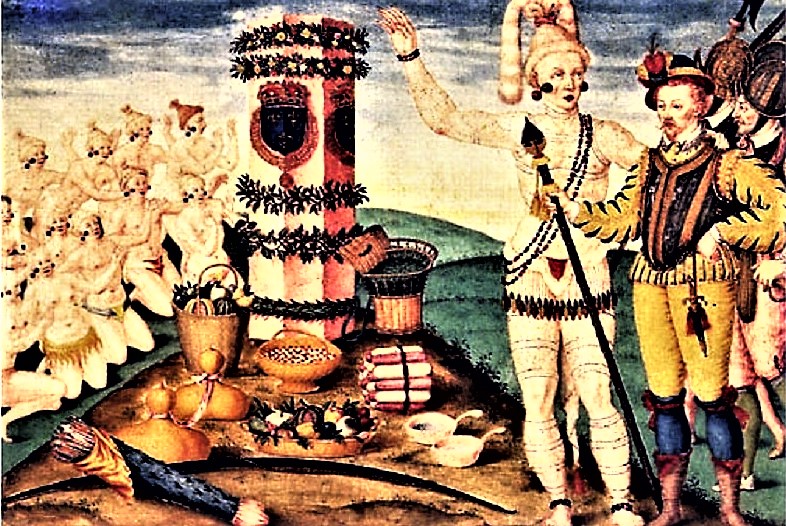 French Stone Column in Florida Timucuan Indians worshipping a stone column with the French coat of arms erected by Jean Ribault at the mouth of the River May (St. Johns River) in 1562

John Hawkins makes his 2nd voyage to the West Indies and Guinea.

1568 Hawkins fights Spanish at Battle of Vera Cruz, later sets ashore at Tampico, Mexico, where 3 of his men begin a 12 month march to the north, reaching Cape Breton. 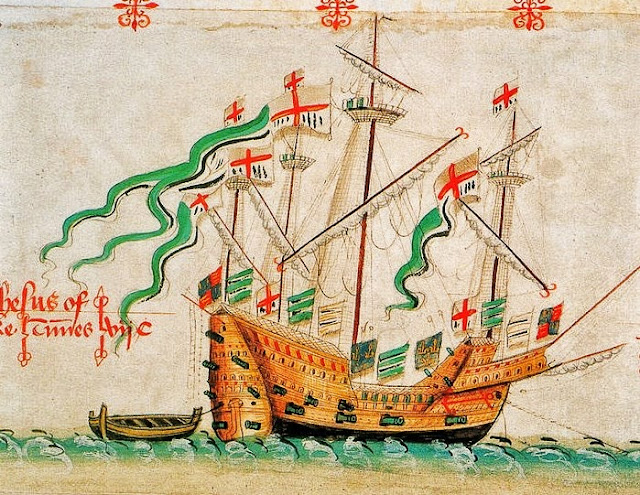 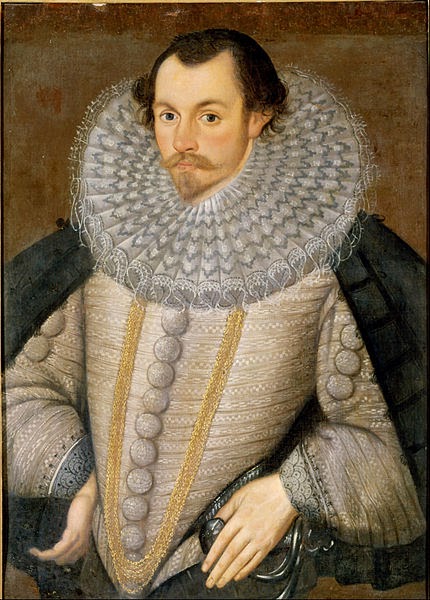 England & Netherlands sign treaty to join together to fight Spain. 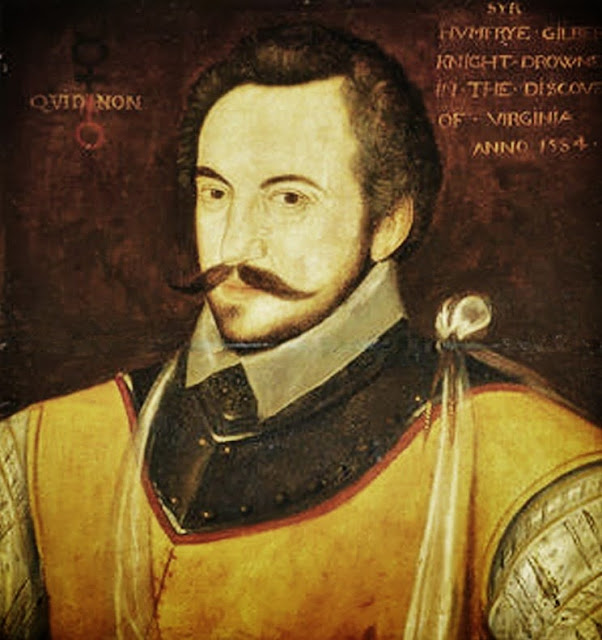 
Queen Elizabeth granted Sir Humphrey Gilbert (1539-1583) a patent to plant a colony in North America, but he had died at sea on his 2nd attempt. In 1584 Gilbert's half-brother, Walter Raleigh, took over the charter & sent out a reconnaissance expedition of his own, which explored the Outer Banks of North Carolina & Roanoke Island looking for a site that could support a settlement & serve as a base for English privateers to prey on Spanish shipping.  Roanoke was chosen on the advice of the Portuguese pilot Simon Ferdinando or Fernandes (Portuguese: Simão Fernandes) (c 1538 – c 1590), who was familiar with the area from his earlier service with Spain, when he was a Portuguese-born navigator and sometime pirate who piloted the 1585 & 1587 English expeditions to found colonies on Roanoke island. Fernandes trained as a navigator in Spain at the Casa de Contratación in Seville, but later took up arms against the Spanish empire, preying upon Spanish shipping along with fellow pirate John Callis. Charged with piracy in 1577, he was saved from the hangman's noose by becoming a Protestant & a subject of the Queen of England. In 1578 Fernandes entered the service of Sir Humphrey Gilbert & later Sir Walter Raleigh, piloting the failed 1587 expedition to Roanoke, known to history as the "Lost Colony."  Fernandes disappears from the records after 1590, when he sailed with an English fleet to the Azores.  In 1587, Raleigh sent out that colonizing expedition which included the artist John White & the scholar Thomas Hariot, whose reports & drawings gave Europeans their first view of the American inhabitants of Virginia & their culture. 1583 Humphrey Gilbert's voyage to Newfoundland; his ship is lost on the return voyage. 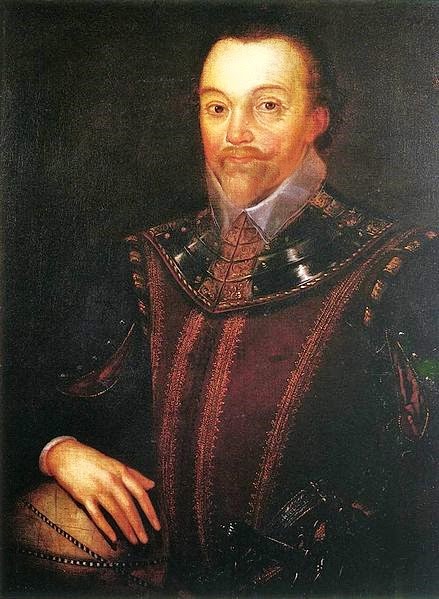 In 1585, under the open encouragement of Queen Elizabeth, Sir Francis Drake sailed out to terrorize the Spanish in the West Indies by attacking their cities & capturing treasure.  On the way home, Drake stopped at Roanoke, where he discovered the settlers in grave straits following a harsh winter.  Unloading the "several hundred" passengers he had picked up in the course of his Caribbean adventures—African slaves, South American Indians, & galley slaves (including Europeans & Moors)—Drake made room on his ships & took the Roanoke settlers back to England.  No one knows what happened to the West Indian passengers so unceremoniously left behind at Roanoke. 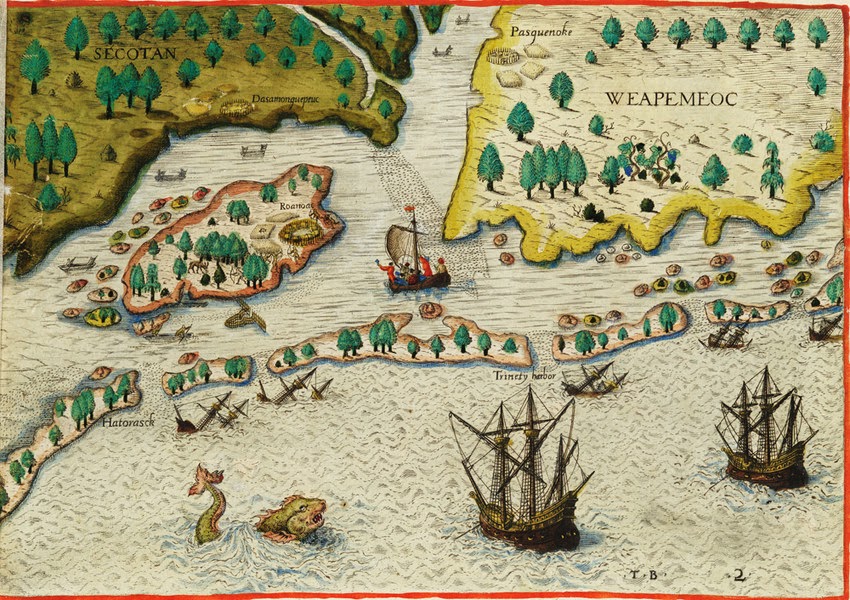 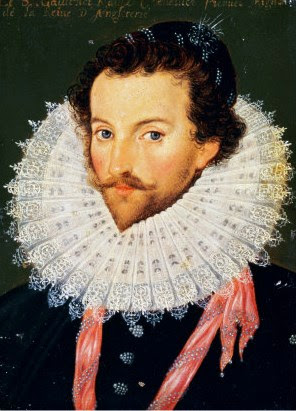 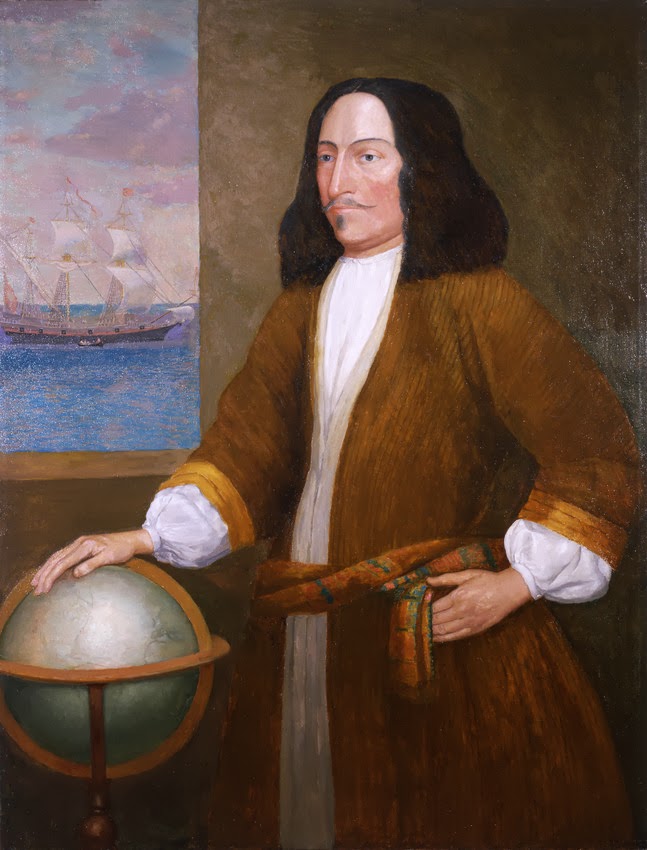 1602 Sir Walter Raleigh sent Samuel Mace of Weymouth on a voyage to Virginia (North Carolina) to gather plant materials & to search for survivors of the Lost Colony. 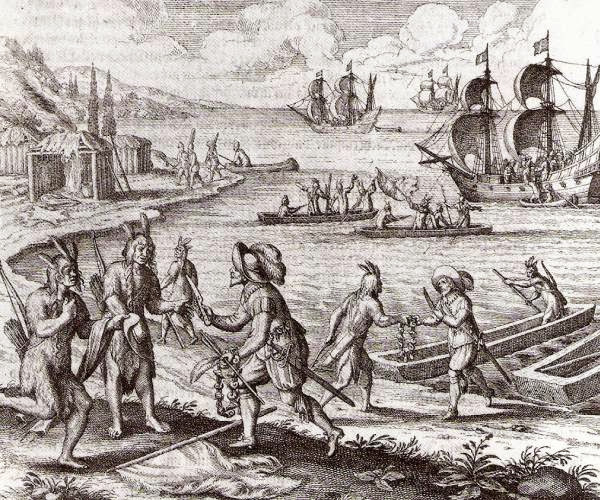 The Virgin Queen Elizabeth I dies, & James VI of Scotland becomes James I.
Posted by Barbara Wells Sarudy at 4:00 AM