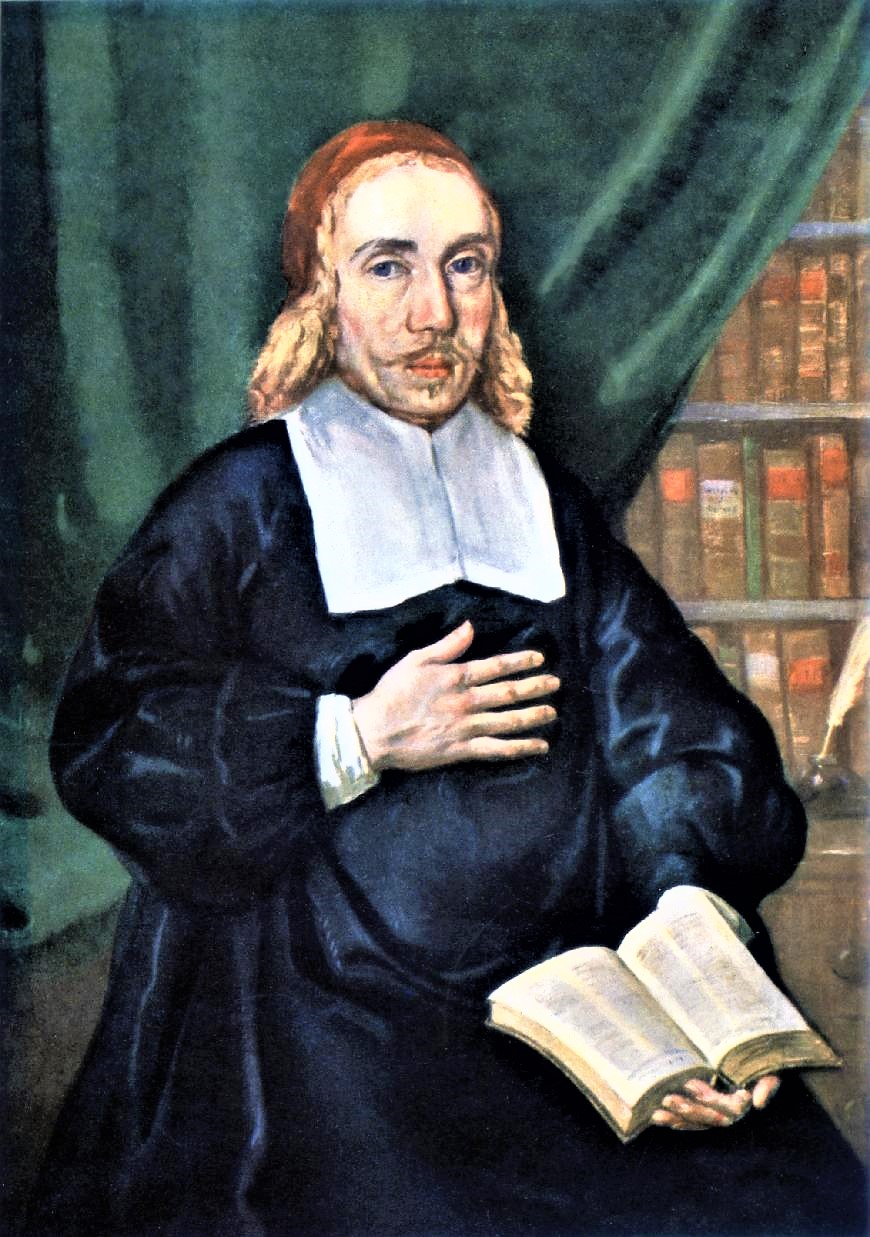 The Rev. John Cotton (1584-1652) of Boston was the leading Puritan minister in the early decades of the Massachusetts Bay Colony. He is known for his initial defense of Anne Hutchinson.  During his 1st 10 years in the colonies, he actually had a prominent part in the 2 controversies which rocked New England to its core, the exile of Roger Williams and the heresies of Anne Hutchinson. First, he was at the center of the antinomian controversy that swirled around Anne Hutchinson. Hutchinson, who had followed Cotton to the New World and to Boston, claimed to adhere to Cotton’s emphasis on the primary of grace and divine sovereignty in conversion, and accused all the other New England ministers (except her newly arrived brother-­in-­law, John Wheelwright) of preaching a covenant of works rather than the covenant of grace. Enthusiastically embracing the doctrine of immediate revelation, she asserted that assurance of faith is experienced by inner feelings of the immediate testimony of the Holy Spirit rather than the evidence of good works. She downplayed the need for sanctification and for the law as a rule of life. The gifted woman attracted many believers into her fellowship and managed to cause friction between Cotton and other ministers, even to the point that some of the ministers began to question Cotton’s orthodoxy. Cotton initially seemed to support Hutchinson and a few of her ideas, particularly a clerical overemphasis on sanctification as evidence of election. Cotton embraced both of these doctrines, but he felt uncomfortable with the amount of emphasis they were receiving among the New England clergy.  Hutchinson’s views were gradually brought out into the open, however, and when she openly lapsed into mysticism, Cotton sided with the other ministers against her.  Cotton’s fellow clergymen presented him with a list of questions to clarify his views in relation to Hutchinson, after which the synod detailed a list of Hutchinsonian errors. The controversy ended dramatically with Hutchinson’s trial and conviction both by the colony’s general court and by the Boston church, which led to her banishment from the colony. The Williams controversy dealt with the relation between church and state. Magistrates are God's deputies and their power goes as far as life and death, said Cotton. Roger Williams declared that a man's religious loyalties are untouchable by civil power.

In the document below, Gov. John Winthrop recorded in his Journal what Cotton's conclusions were in a sermon about fair local economic behavior.

Mo. 9 [Sept. 1639]
At a general court holden at Boston, great complaint was made of the oppression used in the country in sale of foreign commodities; and Mr. Robert Keaine, who kept a shop in Boston, was notoriously above others observed and complained of, and, being convented, he was charged with many particulars; in some, for taking above six-pence in the shilling profit; in some above eight-pence; and, in some small things, above two for one; and being hereof convict, (as appears by the records,) he was fined £200, which came thus to pass: The deputies considered, apart, of his fine, and set it at £200; the magistrates agreed but to £100. So, the court being divided, at length it was agreed, that his fine should be £200, but he should pay but £100, and the other should be respited to the further consideration of the next general court. By this means the magistrates and deputies were, brought to an accord, which otherwise had not been likely, and so much trouble might have grown, and the offender escaped censure. For the cry of the country was so great against oppression, and some of the elders and magistrates had declared such detestation of the corrupt practice of this man (which was the more observable, because he was wealthy and sold dearer than most other tradesmen, and for that he was of ill report for the like covetous practice in England, that incensed the deputies very much against him). And sure the course was very evil, especial circumstances considered: 1. He being an ancient professor of the gospel: 2. A man of eminent parts: 3. Wealthy, and having but one child: 4. Having come over for conscience' sake, and for the advancement of the gospel here: 5. Having been formerly dealt with and admonished, both by private friends and also by some of the magistrates and elders, and having promised reformation; being a member of a church and commonwealth now in their infancy, and under the curious observation of all churches and civil states in the world. These added much aggravation to his sin in the judgment of all men of understanding. Yet most of the magistrates (though they discerned of the offence clothed with all these circumstances) would have been more moderate in their censure: 1. Because there was no law in force to limit or direct men in point of profit in their trade. 2. Because it is the common practice, in all countries, for men to make use of advantages for raising the prices of their commodities. 3. Because (though he were chiefly aimed at, yet) he was not alone in this fault. 4. Because all men through the country, in sale of cattle, corn, labor, etc., were guilty of the like excess in prices. 5. Because a certain rule could not be found out for an equal rate between buyer and seller, though much labor had been bestowed in it, and divers laws had been made, which, upon experience, were repealed, as being neither safe nor equal. Lastly, and especially, because the law of God appoints no other punishment but double restitution; and, in some cases, as where the offender freely confesseth, and brings his offering, onlv half added to the principal. After the court had censured him, the church of Boston called him also in question, where (as before he had done in the court) he did, with tears, acknowledge and bewail his covetous and corrupt heart, yet making some excuse for many of the particulars, which were charged upon him, as partly by pretence of ignorance of the true price of some wares, and chiefly by being misled by some false principles, as 1. That, if a man lost in one commodity, he might help himself in the price of another. 2. That if, through want of skill or other occasion, his commodity cost him more than the price of the market in England, he might then sell it for more than the price of the market in New England, etc. These things gave occasion to Mr. Cotton, in his public exercise the next lecture day, to lay open the error of such false principles, and to give some rules of direction in the case."

Some false principles were these:
1. That a man might sell as dear as he can, and buv as cheap as he can.

2. If a man lose by casualty of sea, etc., in some of his commodities, he may raise the price of the rest.

3. That he may sell as he bought, though he paid too dear, etc., and though the commodity be fallen, etc.

4. That, as a man may take the advantage of his own skill or ability, so he may of another's ignorance or necessity.

5. Where one gives time for payment, he is to take like recompense of one as of another.

The rules for trading-, were these:
1. A man may not sell above the current price, i.e., such a price as is usual in the time and place, and as another (who knows the worth of the commodity) would give for it, if he had occasion to use it: as that is called current money, which every man will take, etc.

2. When a man loseth in his commodity for want of skill, etc., he must look at it as his own fault or cross, and therefore must not lay it upon another.

3. Where a man loseth by casualty of sea, or, etc., it is a loss cast upon himself by providence, and he may not ease himself of it by casting it upon another; for so a man should seem to provide against all providences, etc., that he should never lose; but where there is a scarcity of the commodity, there men may raise their price; for now it is a hand of God upon the commodity, and not the person.

4. A man may not ask any more for his commodity than his selling price, as Ephron to Abraham, the land is worth thus much.

Keayne was censured by his church in Boston (in addition to the fine imposed by the General Court). Fourteen years later (1653), Keayne wrote a 158-page justification for his actions as his last will and testament.