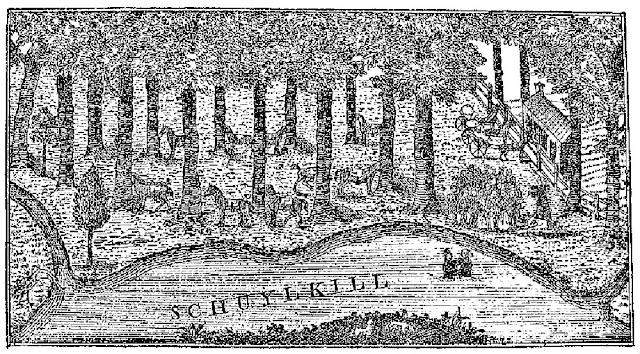 Immersion Baptism in Pennsylvania's Schuylkill River Woodcut from Morgan Edwards, Materials Towards A History of the American Baptists.

John Smyth (c. 1570-1612) was an early Baptist (Puritan, Separatist, Mennonite) minister from England and a defender of the principle of religious liberty. Some historians consider John Smyth as a founder of the Baptist denomination.  Smyth was ordained as an Anglican priest in 1594 in England. Soon after his ordination, he broke with the Church of England & left for Holland where he with a small congregation began to study the Bible ardently.

Smyth insisted that true worship was from the heart & that any form of reading from a book in worship was an invention of sinful man.  Prayer, singing & preaching had to be completely spontaneous.  He introduced a twofold church leadership, that of pastor and deacon. This was in contrast to the Catholic/Anglican hierarchy of bishop, priest.  He thought that believers baptised as infants would have to be re-baptized. He briefly returned to England, but died in Holland.  By the time of his death, Smyth moved away from his Baptist views & began trying to bring his flock into the Mennonite church. Although he died before this happened, most of his congregation did join with the Mennonite church after his death. 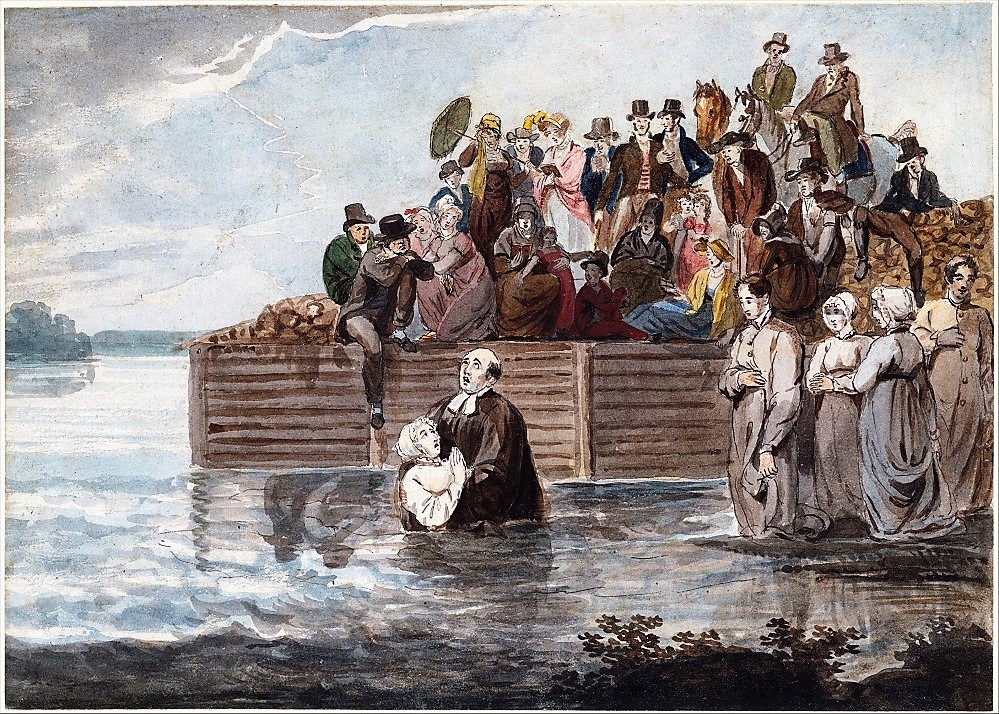 A Short Confession of Faith IN TWENTY ARTICLES BY JOHN SMYTH -1609 WE BELIEVE WITH THE HEART AND WITH THE MOUTH CONFESS:

(1) That there is one God, the best, the highest, and most glorious Creator and Preserver of all; who is Father, Son, and Holy Spirit.

(2) That God has created and redeemed the human race to his own image, and has ordained all men (no one being reprobated) to life.

(3) That God imposes no necessity of sinning on any one; but man freely, by Satanic instigation, departs from God.

(4) That the law of life was originally placed by God in the keeping of the law; then, by reason of the weakness of the flesh, was, by the good pleasure of God, through the redemption of Christ, changed into justification of faith; on which account, no one ought justly blame God, but rather, with his inmost heart, to revere, adore, and praise his mercy, that God should have rendered that possible to man, by his grace, which before, since man had fallen, was impossible by nature.

(5) That there is no original sin (lit;, no sin of origin or descent), but all sin is actual and voluntary, viz., a word, a deed, or a design against the law of God; and therefore, infants are without sin.

(6) That Jesus Christ is true God and true man; viz., the Son of God taking to himself, in addition, the true and pure nature of a man, out of a true rational soul, and existing in a true human body.

(7) That Jesus Christ, as pertaining to the flesh, was conceived by the Holy Spirit in the womb of the Virgin Mary, afterwards was born, circumcised, baptized, tempted; also that he hungered, thirsted, ate, drank, increased both in stature and in knowledge; he was wearied, he slept, at last was crucified, dead buried, he rose again, ascended into heaven; and that to himself as only King, Priest, and Prophet of the church, all power both in Heaven and earth is given.

(8) That the grace of God, through the finished redemption of Christ, was to be prepared and offered to all without distinction, and that not feignedly but in good faith, partly by things made, which declare the invisible things of God, and partly by the preaching of the Gospel.

(9) That men, of the grace of God through the redemption of Christ, are able (the Holy Spirit, by grace, being before unto them grace prevement) to repent, to believe, to turn to God, and to attain to eternal life; so on the other hand, they are able themselves to resist the Holy Spirit, to depart from God, and to perish for ever.

(10) That the justification of man before the Divine tribunal (which is both the throne of justice and of mercy), consists partly of the imputation of the righteousness of Christ apprehended by faith, and partly of inherent righteousness, in the holy themselves, by the operation of the Holy Spirit, which is called regeneration or sanctification. since any one is righteous, who doeth righteousness.

(11) That faith, destitute of good works, is vain; but true and living faith is distinguished by good works.

(12) That the church of Christ is a company of the faithful; baptized after confession of sin and of faith, endowed with the power of Christ.

(13) That the church of Christ has power delegated to themselves of announcing the word, administering the sacraments, appointing ministers, disclaiming them, and also excommunicating; but the last appeal is to the brethren of body of the church.

(14) That baptism is the external sign of the remission of sins, of dying and of being made alive, and therefore does not belong to infants.

(15) That the Lord’s Supper is the external sign of the communion of Christ, and of the faithful amongst themselves by faith and love.

(16) That the ministers of the church are, not only bishops (“Episcopos”), to whom the power is given of dispensing both the word and the sacraments, but also deacons, men and widows, who attend to the affairs of the poor and sick brethren.

(17) That brethren who persevere in sins known to themselves, after the third admonition, are to be excluded from the fellowship of the saints by excommunication.

(18) That those who are excommunicated are not to be avoided in what pertains to worldly business (civile commercium).

(19) That the dead (the living being instantly changed) will rise again with the same bodies; not the substance but the qualities being changed.

(20) That after the resurrection, all will be borne to the tribunal of Christ, the Judge, to be judged according to their works; the pious, after sentence of absolution, will enjoy eternal life with Christ in heaven; the wicked, condemned, will be punished with eternal torments in hell with the devil and his angels.

Richard Day, A Booke of Christian Prayers 1581 - Infant Baptism
Posted by Barbara Wells Sarudy at 4:00 AM