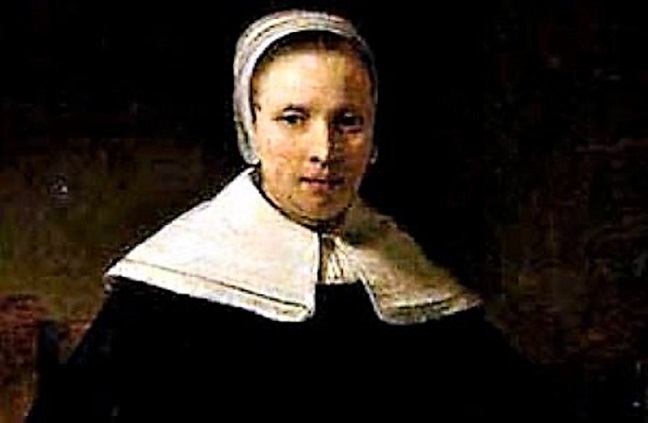 Anne Bradstreet was born in England, in 1612. As the daughter of Thomas Dudley, a steward of the estate of the Earl of Lincoln, & Dorothy Yorke, a well-educated woman learning history, several languages, and literature. At the age of 16 she married Simon Bradstreet,who assisted her father with the management of the Earl's estate in Sempringham.  Both Anne's father & husband would serve as governors of the Massachusetts Bay Colony.

Although Anne Dudley Bradstreet did not attend school, she received an excellent education from her father, who was widely read— Cotton Mather described Thomas Dudley as a "devourer of books"—and from her extensive reading in the well-stocked library of the estate of the Earl of Lincoln, where she lived while her father was steward from 1619 to 1630. There the young Anne Dudley read Vergil, Plutarch, Livy, Pliny, Suetonius, Homer, Hesiod, Ovid, Seneca, and Thucydides as well as Spenser, Sidney, Milton, Raleigh, Hobbes, Joshua Sylvester's 1605 translation of Guillaume du Bartas's Divine Weeks and Workes, and the Geneva version of the Bible. In general, she benefited from the Elizabethan tradition that valued female education.

To My Dear and Loving Husband

If ever two were one, then surely we.
If ever man were lov'd by wife, then thee;
If ever wife was happy in a man,
Compare with me ye women if you can.
I prize thy love more than whole Mines of gold,
Or all the riches that the East doth hold.
My love is such that Rivers cannot quench,
Nor ought but love from thee, give recompence.
Thy love is such I can no way repay,
The heavens reward thee maniford I pray.
Then while we live, in love lets so presever,
That when we live no more, we may live ever.

Anne Bradstreet's works tend to be directed to members of her family and are generally intimate.Here in Bradstreet's "To My Dear and Loving Husband", the poem's intended audience is her husband, Simon Bradstreet. The focal point of this poem is the love that she has for her husband. "I prize thy love more than whole mines of gold". To Bradstreet, her husband's love is worth more than some of the best treasures that this earth has to offer. She also makes it a point to show to her husband that nothing can fill the love that she has for her husband. The lines, "My love is such that rivers cannot quench," the rivers represent death, which she says the fire of her love is invulnerable to. "Then when we live no more, we may live ever."

Anne, her husband, and her parents immigrated to America aboard the Arbella as part of the Winthrop Fleet of Puritan emigrants in 1630. Despite poor health including tuberculosis & eventual joint paralysis, she had 8 children and achieved a comfortable social standing in the Massachusetts Bay Colony.

Simon Bradstreet was active in colonial politics, and was selected to serve as colonial secretary, a post he held until 1644, which required frequent traveling to the various outposts of the colony.  During these years, often alone with her eight children, Anne took consolation in her writing, and it was during this time that she wrote a collection of poems published in London in 1650, probably without her knowledge, as The Tenth Muse Lately Sprung up in America…by a Gentlewoman in these Parts. This established Anne Bradstreet as the first female poet in the New World, and the first published poet in the English colonies of North America.

She was the first notable American poet, and the first woman to be published in colonial America. Her work was influential to Puritans in her time and is read today for its religious insights.

In 1666, fire burned down the Bradstreet home which contained 800 of Anne's books. Shortly afterward she lost a son and a daughter. But her will remained strong, and she found peace in the firm belief that her children were in heaven.

Believing that all gifts come from God, Ann wrote of the fire,
"And when I could no longer look,
I blest his grace that gave and took,
That laid my goods now in the dust.
Yea, so it was, and so 'twas just.
It was his own; it was not mine.
Far be it that I should repine."

Bradstreet was not responsible for her writing becoming public. Bradstreet's brother-in-law, John Woodbridge, sent her work off to be published. Bradstreet was a righteous woman and her poetry was not meant to bring attention to herself. Though Bradstreet's works are renowned in today's world, it still was a great risk to have had her work published during the time in which she lived.

Being a published author would have not been considered as a typical role of the Puritan woman. Because writing was not considered to be an acceptable role for women at the time, Bradstreet was met with criticism. One of the most prominent figures of her time, John Winthrop, criticized Ann Hopkins, wife of prominent Connecticut colony governor Edward Hopkins. He mentioned in his journal that Hopkins should have kept to being a housewife and left writing and reading for men, "whose minds are stronger." Despite heavy criticism of women during her time, Bradstreet continued to write which led to the belief that she was interested in rebelling against societal norms of the time.

A prominent minister of the time, Thomas Parker, was also against the idea of women writing and sent a letter to his own sister saying that publishing a book was outside of the realm of what women were supposed to do. These negative views were likely augmented by the fact that Puritan ideologies stated that women were vastly inferior to men.

Bradstreet was acutely aware that Puritan society trivialized the accomplishments of women. The popular belief was that women should be doing other things like sewing, rather than writing poetry. "I am obnoxious to each carping tongue Who says my hand a needle better fits, A poet's pen all scorn I should thus wrong. For such despite they cast on female wits: If what I do prove well, it won't advance, They'll say it's stol'n, or else it was by chance."