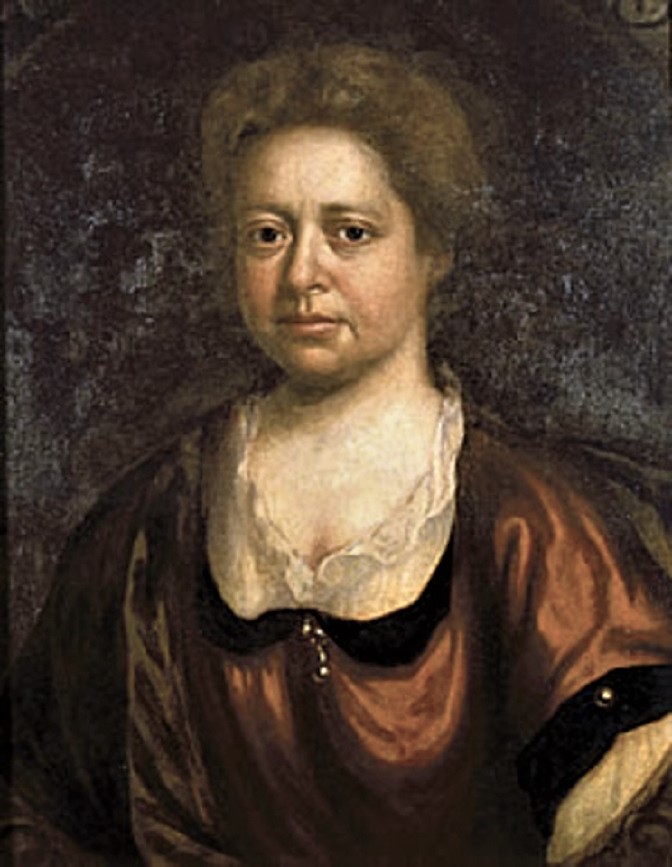 It is reported that her husband, Col. George Eskridge, played an important part in the life of the first US President, George Washington.  It is recorded that Col. George Eskridge came from Lancaster, England, & in 1670 was seized in Wales by press gang and who carried him aboard a ship bound for Virginia where he was sold to a planter as an indentured servant for 8 years. When freed, he returned to England to get his law degree and then came back to northern neck of Virginia between the Potomac and Rappahannock. He settled in Westmoreland County, VA in 1696. He was an eminent lawyer, served ten years as member of the house of Burgess and a member of Quorum and King's Attorneys. His plantation of many thousand acres (land grants show 12,644 acres) was called Sandy Point and was located on the historic Potomac River. George Washington's mother's name was Mary Ball. Her father referred to her as "his little rose of Epping Forest."  He died when she was about 3 years old. Her mother died a few years later, and in her will she named Col. George Eskridge as the guardian of Mary. She spent her girlhood in the Eskridge home and later married a neighbor, Augustine Washington. The marriage took place at Sandy Point. Her son was named George for Mary's much-loved guardian.  Col. Eskridge was a vestryman of Yeocomico Episcopal Church (est 1655) in Virginia. His portrait, together with that of his wife Rebecca Bonum, hung for several years at Mount Vernon plantation.

See Online: Family Tree Maker, World Family Tree Vol. 6, #3663, by Paula M. Radican: "George Washington was undoubtedly named for him. Douglas S. Freeman so stated in his biography of Washington. Mary Hewes the mother of Mary Ball and of Mary's older half-sister, Elizabeth Johnson who married Samuel Bonum...named Colonel Eskridge as the guardian of Mary Ball. He served in this capacity from the time Mary was 13 years old until she married Augustine Washington. Mary Ball was reared in the home of Colonel Eskridge and her marriage to the father of the "Father of our Country" took place from our ancestor's home. It was George Eskridge who held their first born as he was christened George Washington. A highway marker near Sandy Point, Westmoreland County, VA attests to this fact." quoted from the book Kin of my Grandchildren by Judge Noble Littell.

Online: Family Genealogy Forum, submitted by Sara Washburn: "Colonel George Eskridge, a Deputy to the Virginia House of Burgesses for many years in the first half of the 18th century, was guardian to Mary Ball, the mother of George Washington. It is stated that Col. Eskridge, who died in 1735, came to America about 1670, probably from Lancashire. He married, first, Rebecca, daughter of Samuel and Margaret (Philpot) Bonum. Rebecca (Bonum)Eskridge had a brother, Samuel Bonum, whose wife was Elizabeth Johnston, the half-sister of Mary Ball. Col. Eskridge married, second, Elizabeth, daughter of Robert Vaulx.

Online: http://sherrysharp.com/gentree/getperson.php?personID=I10163&tree=Roots  From a story about George Washington's baptism (where he is named George after Col. Eskridge) "One of these is a certain important gentleman from "down the river", Col. George Eskridge of Sandy Points--he so belongs in the picture. He is a full-faced, dignified man, an eminent lawyer, and of high standing in the community. He long was the faithful guardian of young Mary Ball, now the wife of Augustine, and the mother of the child to be baptized. Much honor is come to him this day.'" From George Washington Man and Monument by Marcus Cunliffe, 1958, A Mentor Book, New York and Scarborough, Ont., The New English Library Limited, London, p 33: speaking of the mother of George Washington, "...Mary was much attached to her guardian, a genial lawyer named George Eskridge; and it was apparently after him that she named her first-born child: George Washington. Otherwise he might perhaps have been given the family name of John; Lawrence and Augustine had already been used for his half brothers."
Posted by Barbara Wells Sarudy at 4:00 AM