1619 Letter on Tobacco (not a word about Slaves!) from John Pory, Secretary of Virginia 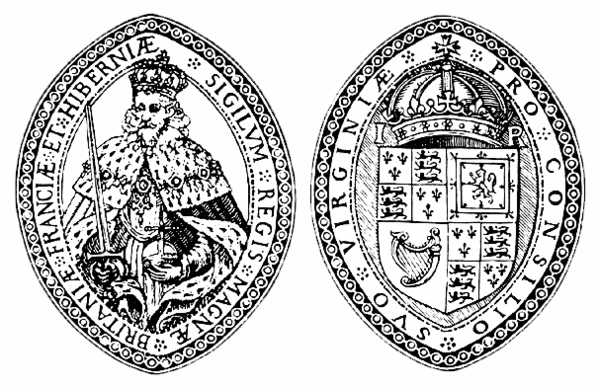 The London Company was an English joint-stock company established in 1606 by royal charter by King James I with the purpose of establishing colonial settlements in North America.


Letter on Tobacco not Slaves from John Pory, Secretary of Virginia (1619)
(1572–1636) an official appointed by the Virginia Company, wrote this letter in the important year of 1619 -when the 1st persons of African ancestry were brought to Virginia. Yet, Pory  focused on an apparently good harvest that had offered a brief respite from previous years of death and starvation, and he wrote about the colonists' obsession with growing tobacco and obtaining servants.

Right Honourable, and my singular good Lorde:
. . . Both those of our nation and the Indians also have this Torrid summer been visited with great sickness and mortality; which our good God (his name be blessed for it) hath recompensed with a marvelous plenty, such as hath not been since our first coming into the land. For my self I was partly at land and partly at sea vexed with a calenture of some 4 or 5 months. But (praised be God) I am now as healthful as ever I was in my life. Here (as your lordship cannot be ignorant) I am, for fault of a better, Secretary of Estate, the first that ever was chosen and appointed by Commission from the Counsell and Company in England, under their hands and common scale. By my fees I must maintain my self; which the Governour tells me, may this year amount to a matter of £300 sterling; whereof fifty I do owe to himself, and I pray God the remainder may amount to a hundred more. As yet I have gotten nothing, save only (if I may speak it without boasting) a general reputation of integrity, for having spoken freely to all matters, according to my conscience; and as near as I could discern, done every man right.

As touching the quality of this country, three things there be which in few years may bring this Colony to perfection; the English plough, Vineyards, and Cattle. For the first, there be many grounds here cleared by the Indians to our hands, which being much worn out,' will bear no more of their corn, which requireth an extraordinary deal of sappe and substance to nourish it; but of our grain of all sorts it will bear great abundance. We have had this year a plentiful crop of English wheat, though the last harvest 1618 was only shed upon the stubble, and so self-sown, with out other manurance. In July last so soon as we had reaped this self-sown wheat, we set Indian corn upon the same ground, which is come up in great abundance; and so by this means we are to enjoy two crops in one year from off one and the same field. The greatest labour we have yet bestowed upon English wheat, hath been upon new broken up ground one ploughing only and one harrowing, far short of the Tithe used in Christendom, which when we shall have ability enough to perform, we shall produce miracles out of this earth.

All our riches for the present do consist in Tobacco wherein one man by his own labour hath in one year raised; to himself to the value of £200 sterling; and another by the means of six servants hath cleared at one crop a thousand pound English. These be true, yet indeed rare examples, yet possible to be done by others. Our principal wealth (I should have said) consisteth in servants: But they are chargeable to be furnished with arms, apparel and bedding and for their transportation and casual [contingent expenses], both at sea, and for their first year commonly at land also: But if they escape, they prove very hardy, and sound able men.

Now that your lordship may know, that we are not the veriest beggers in the world, our cowkeeper here of James City on Sundays goes accoutered all in fresh flaming silk; and a wife of one that in England had professed the black art, not of a scholar, but of a collier of Croydon, weare her rough beaver hat with a fair pearl hatband, and a silken suit thereto correspondent. But to leave the Populace, and to come higher; the Governour here, who at his first coming, besides a great deal of worth in his person, brought only his sword with him, was at his late being in London, together with his lady, out of his mere gettings here, able to disburse very near three thousand pound [£] to furnish himself for his voyage. And once within seven years, I am persuaded (absit invidia verbo) that the Governors place here may be as profitable as the lord Deputies of Ireland.

. . . And therefore seeing I have rnissed that singular happiness [being placed in Sir Dudley's service], I must for what remains, depend upon Gods providence, who my hope is, will be so merciful towards me, as once more before I die, to vouchsafe me the sight of your countenance, wherein, I speak unfainedly, I shall enjoy as much happiness as in any other thing I can imagine in this world.

At my first coming hither the solitary uncouthness of this place, compared with those parts of Christendome or Turkey where I had been; and likewise my being sequestered from all occurrences and passages which are so rife there, did not a little vex me. And yet in these five months of my continuance here, there have come at one time or another eleven sail of ships into this river; but freighted more with ignorance, then with any other merchandise. At length being hardened to this custom of abstinence from curiosity, I am resolved wholly to mind my business here, and next after my pen, to have some good book always in store, being in solitude the best and choicest company. Besides among these Crystal rivers, and odiferous woods I do escape much expense, envy, contempt, vanity, and vexation of mind. Yet good my lorde, have a little compassion upon me, and be pleased to send me what pamplets and relations of the Interim since I was with you, as your lordship shall think good, directing the same (if you please) in a box to Mr. Ralfe Yeardley, Apothecary (brother to Sir George Yeardley our governour), . . .

Your lordships ever most humbly at your command,
John Pory