1640 Founding of Harvard College - for Men Only


The History of the Founding of Harvard College 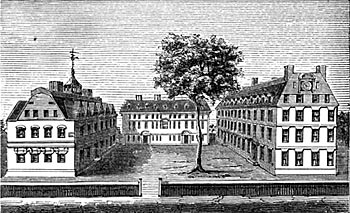 AFTER GOD HAD carried us safe to New England, and we had built our houses, provided necessaries for our livelihood, reared convenient places for God's worship, and led the civil government, one of the next things we longed for and looked after was to advance learning and perpetuate it to posterity; dreading to leave an illiterate ministry to the churches, when our present ministers shall lie in the dust.

And as we were thinking and consulting how to effect this great work, it pleased God to stir up the heart of one Mr. Harvard (a godly gentleman and a lover of learning, there living among us) to give the one-half of his estate (it being in all about £700) toward the ing of a college, and all his library. After him, another gave £300; others after them cast in more; and the public hand of the state added the rest.

The college was, by common consent, appointed to be at Cambridge (a place very pleasant and accommodate) and is called (according to the name of the first founder) Harvard College. The edifice is very fair and comely within and without, having in it a spacious hall where they daily meet at commons, lectures, and exercises; and a large library with some books to it, the gifts of diverse of our friends, their chambers and studies also fitted for and possessed by the students, and all other rooms of office necessary and convenient with all needful offices thereto belonging. And by the side of the college, a fair grammar school, for the training up of young scholars and fitting of them for academical learning, that still as they are judged ripe they may be received into the college of this school.

Master Corlet is the master who has very well approved himself for his abilities, dexterity, and painfulness in teaching and education of the youths under him.

Over the college is Master Dunster placed as president, a learned, a conscionable, and industrious man, who has so trained up his pupils in the tongues and arts, and so seasoned them with the principles of divinity and Christianity, that we have to our great comfort (and in truth) beyond our hopes, beheld their progress in learning and godliness also. The former of these has appeared in their public declamations in Latin and Greek, and disputations logic and philosophy which they have been wonted (besides their ordinary exercises in the college hall) in the audience of the magistrates, ministers, and other scholars for the probation of their growth in learning, upon set days, constantly once every month to make and uphold. The latter has been manifested in sundry of them by the savory things of their spirits in their godly versation; insomuch that we are confident, if these early blossoms may be cherished and warmed with the influence of the friends of learning and lovers of this pious work, they will, by the help of God, come to happy maturity in a short time.

Over the college are twelve overseers chosen by the General Court, six of them are of the magistrates, the other six of the ministers, who are to promote the best good of it and (having a power of influence into all persons in it) are to see that everyone be diligent and proficient in his proper place.
Posted by Barbara Wells Sarudy at 4:00 AM