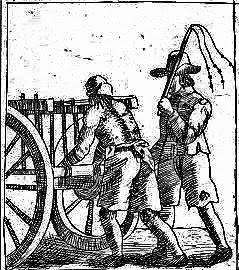 November 15, 1636
Capitall offences lyable to death. Sodomy, rapes, buggery. Adultery to be punished. (Offences criminall, Altered.) [Adultery crossed out] ffornicacion & other uncleane carriages to be punished at the discretion of the Majestrates according to the nature thereof. Fornicacion before contract or marriage.

That none be allowed to marry that are under the covert of parents but by their consent & approbacion. But in case consent cannot be had then it shall be with the consent of the Governor, or some assistant to whom the persons are knowne whose care it shall be to see the marriag be fitt before it be allowed by him. & after approbacion be three severall times published before the solemnising of it. Or els in places where there is no such meetings that contracts or agreements of marriage may be so published, that then it shalbe lawfull to publish them by a writing thereof made & set vpon the usuall publike place for the space of fifteene days. Provided that the writing be vnder some majestrates hand or by his order.

December 4, 1638
Wheras diuers persons vnfitt for marriage both in regard of their yeong yeares as also in regard of their weake estate, some praciseing the enveagleing of mens daughters & maids vnder gardians (contrary to their parents & gardians likeing) & of mayde sevants without leaue & likeing of their masters It is therefore enacted by the Court That if any shall make any motion of marriage to any mans daughter or mayde servant not having first obtayned leaue & consent of the parents or master so to doe shalbe punished either by fine or corporall punishment or both, at the discretion of the bench & according to the nature of the offence. It is also enacted that if a motion of marriage be duly made to the master & through any sinister end or couetous desire hee will not consent therevnto Then the cause to be made knowne vnto the Majestrates & they to set downe such order therein as vpon examinacion of the case shall appeare to be most equall on both parts.

June 4, 1645
It is enacted et cetera That every person or persons which shall comitt Carnall Copulacion before or eithout lawfull contract shalbe punished wither with corporall punishment by whipping or els pay tenn pounds a peece fine & be ymprisoned during the pleasure of the Court so it be not aboue three dayes, but if they be or wilbe marryed one to another, then but tenn pounds both & ymprisonment as aforesaid. And by A lawfull contract the Court vnderstands the mutuall consent of two parties with the consent of parents or guardians (if there be any to be had) & a solemme promise of marriage in due tyme to eich other before two competent witnesses. And if any person or persons shall committ carnall copulacion after contract & before marriage shall both pay five pounds & be both imprisoned during the pleasure of the Court so it be not above three dayes, or else in case they cannot or will not pay the fyne then to suffer corporall punishment by whipping.

Wheras some abuses haue formerly broken out amongst us by disguiseing weareing visors & strang apparell to laciuious ends & purposes It is therefore enacted That if any person or persons shall hereafter use any such disquisements visors strang apparell or the like to such lacivious & euell ends & intens, & be thereof convict by due course of law shall pay fifty shillings for the first offence or els be publikely whipt & for the second tyme fiue pounds or be publikly whipt & be bound to the behauior if the Bench shall see cause.

June 9, 1653
That euery person of the age of descretion which is accounted sixteen yeares whoe shall witingly & willingly make or publish any Lye which may bee pernitius to the publicke weale or tending to the dammage or hurt of any particulare person or with entent to deceiue & abuse the people with falce newes or reports & the same duely proued before any one Maiedtrate whoe hath heerby power graunted to heare & determine all offences against this Law; shalbee fined for euery such default ten shillings; And if the partie bee vnable to pay then to bee sett in the stockes soe longe as the said Maiestrate shall appoint in som open place not exceeding the space of two houres.

September 29, 1658
It is enacted by the court & the authoritie therof that whosoeuer shall comitt Adultery shalbee seuerly punished by Whiping two seuerall times; namely once whiles the Court is in being att shich they are convicted of the fact & the 2cond time as the Court shall order & likewise to weare two Capitall letters namely A D cut out in cloth & sowed on theire vpermost Garments on theire arme or backe; & if att any time they shalbee taken without the said letters whiles they are in the Gouernment soe worn to bee forth with taken & publickly whipt.

July 2, 1667
It is enacted by the Court that such as comitt fornication or comon drunkards that noe fine be receiued from them for their fact vntill they haue bin convicted therof before the Court vnlesse some vnavoidable Impediment shall hinder theire appeerance theratt.

June 1670
It is enacted by the Court that whosoeuer haueing comitted vncleanes in another Collonie & shall come hither & haue not satisfyed the law where the fact was comitted they shalbe sent backe or heer punished according to the Nature of the crime as if the acte had bine heer done.