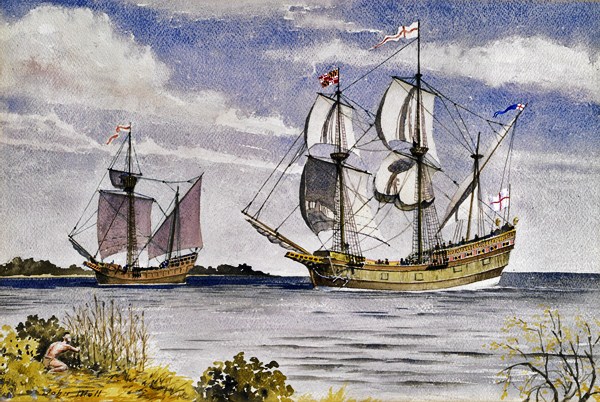 In mid-October 1633 after fitting out at Blackwall, the Ark & the Dove dropped down the Thames to anchor off Gravesend where they were to take on stores & passengers. Soon after that, John Coke, the Secretary of State, sent an urgent dispatch to Admiral John Pennington: "The Ark of London, Richard Lowe, master, carrying men for Lord Baltimore to his new plantation sailed from Gravesend contrary to orders" & those aboard had "not taken the oath of allegiance to the Crown" as they were required to do by a warrant from Whitehall dated July 31. The Ark was intercepted & taken back under guard to Tilbury Hope across from Gravesend. The oath was administered by October 29 & the ships received permission to leave England on October 30, "Provided there be no other person or persons aboard the said shippe or pinnace but such as have or shall have taken the oath of allegiance as aforesaid." The ships then made their way to Cowes on the Isle of Wight where they awaited favorable weather. They received final instructions from Lord Baltimore on September 15.

On Saturday, November 22, 1633, the Ark & the Dove finally sailed for Maryland, heading west along the south coast of England with fair weather & following winds. On Monday morning the twenth-fourth, she passed the western capes of England. Then on evening of November 25, Father &rew White, a passenger, wrote, "the wind changed.so violent, & tempestuous as the Draggon [a 600-ton English ship] was forced back to ffamouth [Falmouth] not able to keep the sea..Our master was a very sufficient seaman, & shipp as strong as could be made of oake & iron, 400 tonne kingbuilt; makinge fair weather in great storms. Now the master had his choise, whether he would return England as the Draggon did, or saile so close up to the winde, as if he should not hold it he must necessarily fall upon the Irish shore,.of these two, out of a certaine hardinesse & desire to trie the goodnesse of his shipp, in which he had never been at sea afore, he resolved to keep the sea, with great danger, wanting sea room."

The Dove was unable to keep at sea in this storm & ran northeast to the Scilly Isles, 30 miles north of the north coast of Cornwall. She was not to be seen again by the Ark until January at Barbados. Then on November 29 the Ark, now alone, encountered very violent weather, "before we could take in our maine Course [sail] wch we only carried, a furious.winde suddainely came, & split it from top to toae.and then the helme being bound up, & the ship left without saile or government floated at hull like a dish.[then] by little & little still more.we were with milder weather freed from all those horrours." With better weather the Ark turned southward & sailed past the coast of Spain to the Canary Islands where she turned west southwest for the West Indies.

On January 3, 1634, the Ark entered the fortified English port of Bridgetown, Barbados, after a fast passage of 43 days from Cowes that covered 3,500 to 4,000 nautical miles. By mid-January she was ready to leave when the Dove unexpectedly arrived in company with the Dragon. The Ark & Dove departed northward on January 24, stopping at St. Christopher's (now St. Kitts) for 10 days & at Point Comfort at the mouth of the James River for eight or nine days. Then they sailed up the Chesapeake Bay to the Potomac River where they reached their first landing place in Maryland on March 24, 1634. By March 27, Governor Leonard Calvert & his advisors had selected a site for their town. They named it St Mary's. 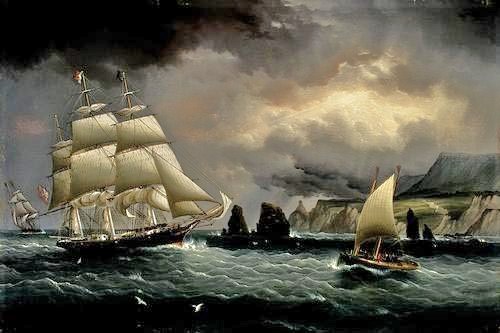